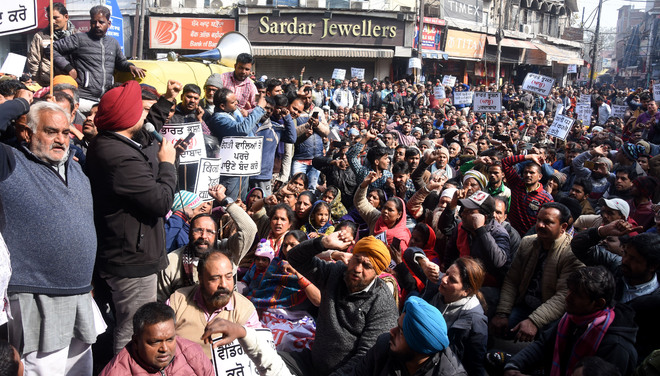 While accusing the authorities concerned of not setting up vending zones, a large number of street vendors staged a protest against the MC and the police at the MC headquarters (Zone A) near Mata Rani Chowk today. They also raised slogans against Cabinet Minister Bharat Bhushan Ashu and Mayor Balkar Singh Sandhu for ignoring their demands.

The street vendors gathered in the Daresi area in the morning and they marched towards Chaura Bazaar where they also staged a protest. The vendors have demanded cancellation of the FIRs against vendors and release of their impounded carts by the MC.

President of the Rehri Phari Union Punjab Bal Krishan Pappi said: “When we staged a protest at Jagraon Bridge, an MC official had assured us that their voice will be heard but nothing has been done to address our issues. We are not being given information about the sites identified for vending zones. Earlier, the MC authorities had claimed that the street vendors can station their carts at the identified sites but they never told where these sites are located.”

“The MC authorities should deploy special teams to shift the vendors to the identified sites so that the vendors can generate income to feed their families,” he added.

The MC is supposed to set up vending zones for the street vendors. The vendors claimed that the civic body is not implementing the Street Vendors (Protection of Livelihood and Regulation of Street Vending) Act, 2014.

The vendors have threatened that they would intensify their agitation if their demands were not met. Questions are being raised over the role of the MC for delaying setting up of vending zones despite repeated requests by the vendors.