Straight from a wildlife book 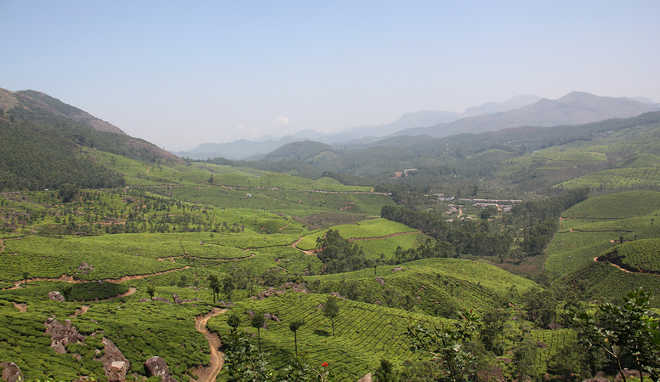 Nothing can be more exhilarating to a nature lover than to chance upon wildlife. Living in the environs of Kerala’s Munnar, I often have an unexpected tryst or two with nature during my daily solo constitutional through verdant tea fields bordered by forests.

Usually, two frisky wagtails join me en route, hopping briskly ahead of me and taking off only when I get too close. They are not afraid of me but like to keep their distance. They seem to be the same birds, or rather pests, who take turns in persistently pecking away at their reflections in my bedroom windowpanes when I’m napping. Indeed, I often wish they’d indulge in their narcissism elsewhere!

Now and then, I surprise a jungle rooster foraging on the path, resplendent in its gold-flecked plumage, its black tail trailing regally behind it. Familiarity, however, hasn’t bred trust in it. Timid, it scampers under the protective canopy of the tea bushes, ungallantly abandoning its harem of three drab-looking hens. They, too, scurry away in no time, squawking agitatedly.

Sometimes, I unknowingly disturb a covey of mountain quail feeding, hidden, in the tall grass beside the path. Alarmed by my proximity, they suddenly burst out from their cover as if flushed out, screeching harshly. Then, their stubby wings whirring rapidly, they fly the very short distance they’re capable of before dropping to the ground to seek cover again.

The tea bush with its dense lateral spread provides an ideal cover for other wildlife as well – barking deer, dholes, porcupines, jackals, hares, and occasionally, the panther. I once espied a couple of dholes conspiratorially lying in wait in a tea field to ambush unwary prey. On seeing me, they loped away, their tawny coats glistening in the morning sun, their stumpy, black-tipped tails raised in alarm.

Last month, while plodding uphill, what seemed to be a large stone about 10 metres ahead, magically metamorphosed into a hare that bounded away. Its drab colour blended so well with the ground as to make it almost invisible — nature’s camouflage that enables it to escape predators.

Recently, as I sauntered down a path snaking through a tea field, a rustling sound alerted me and, lo and behold, a barking deer’s fawn, hardly a month old, tottered out on spindly legs. It had apparently loitered away from its mother who, concealed in the tea field, must have been agonising over its fate as any mother would.

I stood stock-still as the kid regarded me with a mixture of curiosity and fear. Then, perhaps instinctively realising it was unsafe out in the open, it turned and wobbled back into the safety of the tea field where I could now hear its anxious mother stamping around impatiently. The incident warmed the cockles of my conservationist’s heart and made my day.