Eyewitness accounts said hearing ‘something like a boom’ and then ‘clanking of objects,’ while the fire raged for well over half an hour, destroying the copter, killing its occupants and reducing huge trees to ashes 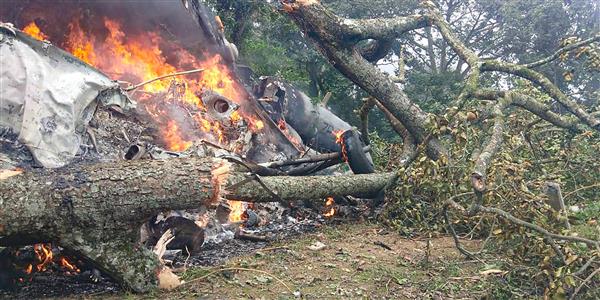 A kind of a thud and ‘something’ whirring from nowhere was the first sign that something has gone seriously amiss. Humble tea estate workers, in their serene Western Ghats village in Nilgiris District of Tamil Nadu were quickly overwhelmed with a sense of foreboding.

Soon, it was sheer disbelief that gripped them in their modest hillside colony when they saw a frightening bright blaze emerging from the misty woods amid clanking of metal objects. Though it was a little past noon, fog still shrouded the hills on Wednesday.

Although neither workers nor their family members could comprehend what was unfolding, they and some local people were the first to reach the location, where the Air Force helicopter, with Chief of Defence Staff Gen Bipin Rawat, his wife and 11 other people on board, crashed.

However, they could not get very close as the fire raged destroying all that it could in the wooded vicinity. The location of the mishap is a forest area, close to a tea estate and mountain chain and valleys.

Eyewitness accounts said hearing ‘something like a boom’ and then ‘clanking of objects,’ while the fire raged for well over half an hour, destroying the copter, killing its occupants and reducing huge trees to ashes.

“The helicopter crashed in a forest area, pretty close to a tea estate. The main, motorable route to this area is only through the tea estate. It was the local people and workers who saw what happened immediately after the crash,” a senior state police official in Chennai told PTI quoting preliminary inputs.

“The Defence authorities could throw light on the crash,” he added.

Eventually, when some people managed to reach close by, they could just not believe what they saw.

When they spotted a ‘burning thing’ they initially thought that it could be the branch of a tree, and on inching closer, the stench of the flesh that was still ablaze made them realise what it was a ‘burning and burnt’ body of a man crushed under the heavy branch of a huge tree that fell down in the impact of the crash.

When they saw another partially burnt body near bushes, apparently of a young soldier, they got an indication of the gravity of the situation. With only some shreds of his olive green uniform over a part of his upper torso, he was just lying flat on the ground, lifeless.

Another army man, who apparently sustained severe burns was lying in a prone position and was obviously dead. People, however, had no clue about the identity of the victims.

According to local people, some occupants of the helicopter may have got thrown out in the impact of crash, which they say happened “as the rotor blade of the chopper hit a huge tree due to poor visibility while on the ascend.”

People in Nilgiris district are accustomed to man-animal conflict and wild animals entering villages and destroying crops and even killing people.

The spectacle of burning bodies, and the stench of flesh and helicopter crash is something they have neither seen nor could easily forget for many years to come. PTI