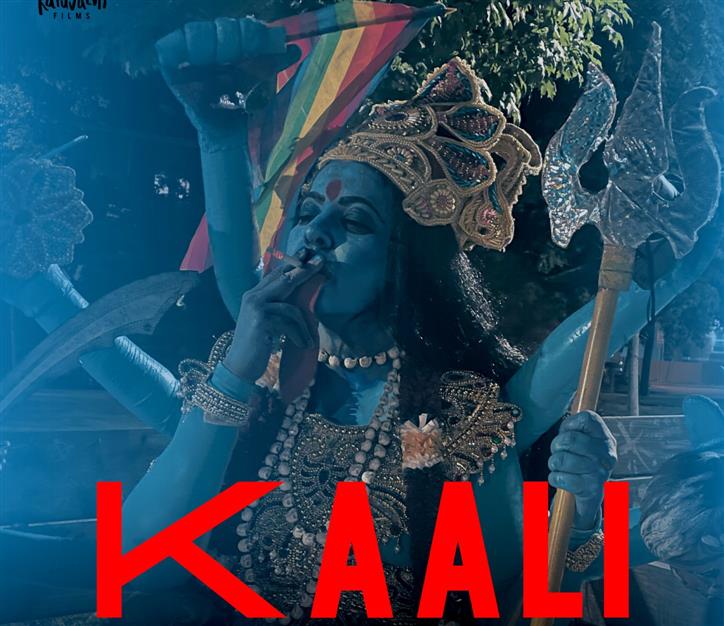 A poster of the film 'Kaali'. Credit: @LeenaManimekali/Twitter

Delhi Police have registered FIRs against the makers of the movie ‘Kaali’ over its poster that allegedly depicts the Hindu goddess smoking a cigarette.

In the FIR, the charges of criminal conspiracy, offence in place of worship, deliberately hurting religious sentiments and intention to provoke breach of peace have been slapped, officials said.

The controversy erupted after filmmaker Leena Manimekalai shared the poster of her film on social media. The poster depicts a woman dressed in the costume of Goddess Kaali. She is seen smoking a cigarette in the photo.

Super thrilled to share the launch of my recent film - today at @AgaKhanMuseum as part of its “Rhythms of Canada”
Link: https://t.co/RAQimMt7Ln

Besides the goddess’ usual trishul (trident) and sickle, the actor playing the role is also shown carrying the LGBTQ+ community’s pride flag.

The cyber crime unit of Delhi Police registered an FIR under Sections 153-A (promoting enmity between groups) and 295-A (outraging religious feelings) of the Indian Penal Code against director Leena Manimekalai, the officials said.

In his complaint, he said, “Movie director Leena Manimekalai posted a tweet on June 2 about her documentary film ‘Kaali’ and shared its poster. In her tweet, she said the poster was released at the Canada Film Festival and that she’s excited about the film. The poster shows Kaali Maa (goddess) smoking a cigarette. The goddess is holding a trishul in one hand and an LGBTQ flag in the other.”

He said Leena's tweet is insulting to the Hindus and their gods. “An inquiry should be conducted against her for hurting the feelings of thousands of Hindus,” he added.

Earlier on Monday, the Indian High Commission in Canada issued a statement on the  poster and urged the Canadian authorities and the event organisers to withdraw “all such provocative material”.

In a statement, the High Commission said they had received complaints from leaders of the Hindu community in Canada about “disrespectful depiction of Hindu gods on the poster of a film showcased as part of the ‘Under the Tent’ project at the Aga Khan Museum in Toronto.