'My advice to Congress chief poll contestants is…': Rahul Gandhi throws top hint he may not run : The Tribune India

'My advice to Congress chief poll contestants is…': Rahul Gandhi throws top hint he may not run 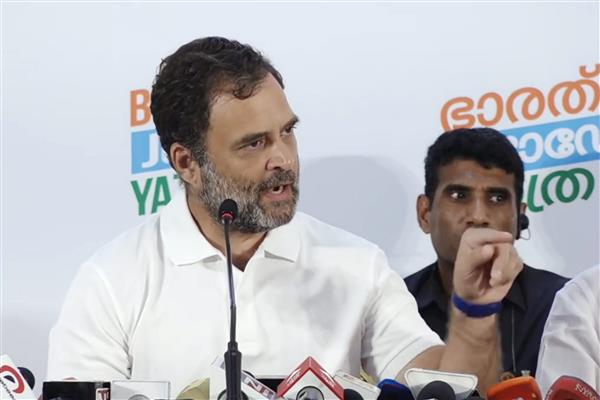 In the strongest hint that he may not run for the office of Congress president, Rahul Gandhi on Thursday sent out advice to other contestants saying the position of the party president is ideological and is in fact a belief system.

Addressing the press at Ernakulam in Kerala, on the 15th day of Bharat Jodo Yatra, Rahul also clearly signalled to Rajasthan Chief Minister Ashok Gehlot that the party’s ‘one person, one post’ pledge taken at Udaipur was sacrosanct and needed to be maintained.

Gehlot, who is set to file his papers for the election of Congress president, has said that he would continue as the CM and that the ‘one person, one post’ rule does not apply to people who contest internal elections and holds good only for the nominated positions.

“What we have decided in Udaipur is a commitment of the Congress. I expect that commitment will be maintained,” Gandhi said when asked to comment on the issue.

Steering clear of direct answers to whether he would run for the office of Congress president, Rahul advised patience saying “everyone will know what is going to happen”.

Earlier on Thursday, the AICC Central Election Authority issued a notification for the election with the process of nomination to start from September 24 until September 30.

Rahul did not speak in the first person, and effectively ruled him out of the contest in which Gehlot and former minister Shashi Tharoor have emerged openly while former Madhya Pradesh CM Digvijay Singh has hinted at an inclination to contest.

“You will know by September 30 what will happen,” Digvijay said, with sections adding that Punjab Congress MP Manish Tewari was also contemplating joining the race.

Gandhi on Thursday also stressed upon the opposition unity to take on the BJP and the RSS, noting that the opposition should discuss and frame a strategy.

Noting that all Congress delegates had the right to fight the party president’s election, Rahul said “Any Congress leader who wants to fight the election has the right to do so. It is not a bad rather a good thing. It's interesting how everyone asks the questions when the Congress president’s election will take place, who will fight the election. Nobody asks this question to the BJP, RSS, communists, SP, BSP. I am saying this with a significant degree of pride as we are the only political party in the country that does this.”