PM’s special flight to US flies over Pak airspace to avoid Afghanistan, gesture a reciprocation of India’s permission to Imran Khan’s special aircraft while flying to Sri Lanka in February 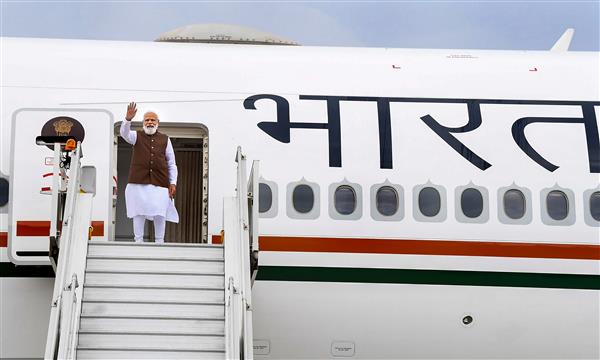 Narendra Modi before flying to the US on Wednesday. PTI

Prime Minister Narendra Modi left for the US on Wednesday to hold bilateral meetings with US President Joe Biden and address the UN General Assembly. The PM will also attend a Quad Summit hosted by Biden at the White House along with his counterparts from Australia and Japan.

PM Modi’s engagements in Washington will include his first meeting with US Vice-president Kamala Harris and an interaction with select CEOs of US MNCs including Adobe, Apple, Blackstone and Qualcomm.

PM Modi will meet Japanese PM Yoshihide Suga and Australian PM Scott Morrison on Friday besides an interaction with Biden to discuss the current regional security situation. The US and India both want the Taliban to adhere to UNSC Resolution 2593 which sets expectations on the secure departure of civilians from Afghanistan, the need to uphold human rights and to encourage all parties for an inclusive and negotiated settlement.

My visit would be an occasion to strengthen the Partnership with US, consolidate relations with our strategic partners - Japan and Australia - and take forward our collaboration on important global issues

The Quad Summit on Friday “provides an opportunity to take stock of the outcomes of our Virtual Summit in March this year and identify priorities for future engagements based on our shared vision for the Indo-Pacific region,” the PM said in his pre-departure statement.

After concluding his engagements in Washington, Modi will travel to New York to attend the UN General Assembly on Saturday where he will address the General Debate of the High-Level Segment of the 76th Session in the evening.

PM Modi’s last visit to the US was for a week during which he addressed the Howdy-Modi event in Houston with then US President Donald Trump.

The PM is being accompanied by NSA Ajit Doval, Foreign Secretary Harsh Vardhan Shringla and other high officials. External Affairs Minister S Jaishankar is already in New York where he held several pull-asides as well as a few structured meetings with his counterparts.

PM Narendra Modi’s special flight to the US flew over Pakistan’s airspace to avoid Afghanistan. The Pakistani gesture was a reciprocation of India’s overflight permission to Pakistan PM Imran Khan’s special aircraft while flying to Sri Lanka in February.