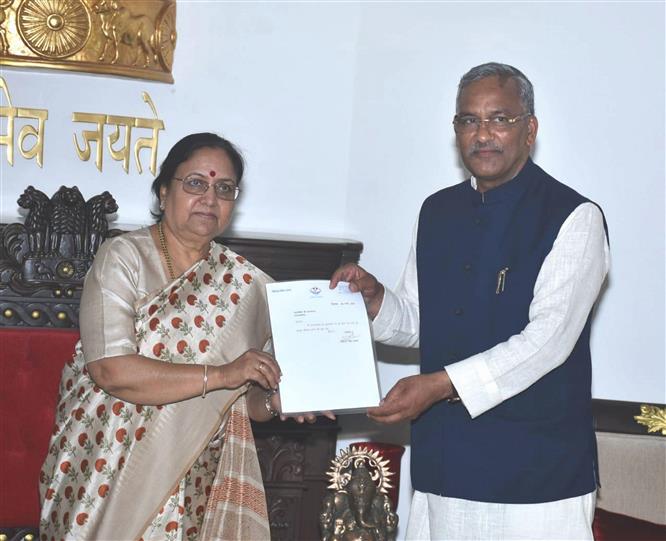 After days of speculations about his future amid rumblings among state leaders over his “style of functioning”, Chief Minister Trivendra Singh Rawat tendered his resignation to Governor Baby Rani Maurya in Dehradun on Wednesday.

Before the resignation, Rawat was closeted with close associates, including ministers Madan Kaushik and Dhan Singh Rawat, who has now emerged front-runner for the post. Incidentally, Baluni is another name on the long list of probables that includes Union Education Minister Ramesh Pokhriyal Nishank, state cabinet minister Satpal Maharaj, Nainital-Udham Singh Nagar MP Ajay Bhat and general secretary of state BJP Suresh Bhat. There is also talk about a Deputy CM “to assuage all sections and regions” of the state that goes to poll next year.

While sources said an “a name acceptable to all in mind the elections next year has already been decided”, BJP’s general secretary in charge of Uttarakhand Dushyant Gautam insisted the decision will be taken at a meeting of legislators on Wednesday. He also said that Trivendra Singh Rawat “will be given a big responsibility in the Centre”.

Addressing a press conference after his resignation, the outgoing chief minister thanked the BJP’s leadership for giving him the opportunity to serve the state.

“These four years have been the golden period of my political career. I had never imagined that the party will give such a big honour to someone like me. This is only possible in the BJP,” he said, recounting the works during his regime and thanking the people. Regarding the resignation, he said all decisions are taken in a “collective manner” in the BJP.

While this is not the first time Narendra Modi and Amit Shah have removed a chief minister of a BJP-ruled state before the elections (Anandiben Patel was replaced by Vijay Rupani in Gujarat), the situation in Uttarakhand is said to be “more serious”. The change has certainly given an opportunity to adversaries, especially the Congress, to strike back with a reminder of the times “BJP engineered trouble” for the Harish Rawat government.

Apart from “serious discontent” amid BJP MLAs and MPs and objections regarding Rawat’s “style of functioning and allowing the bureaucracy to become more powerful peoples’ representatives,” it is learnt that observers’ report also mentioned that it will be difficult for the BJP to win next year with Trivendra Singh as the face.  Apprehensions were also there about the discontent “spilling out in the open” amid the ongoing elections in four States and a UT, a reason why the observers were sent in such a hurry to “handle” the situation on Saturday.

Seemingly, the Sangh Parivaar too was upset with over some of the decisions of the government. Some Congress party imports were also threatening to jump ship ahead of Assembly polls next year, spelling trouble for the ruling party amid “increasing influence” of Aam Aadmi Party in the state.

Rawat has joined the list of Uttarakhand CMs unable to complete their five-year tenure. Of the eight Uttarakhand CMs only the late Narayan Dutt Tewari could complete his tenure between 2002 and 2007.

Uttarakhand, a state carved out of a united Uttar Pradesh in 2000, held its first assembly elections in 2002.