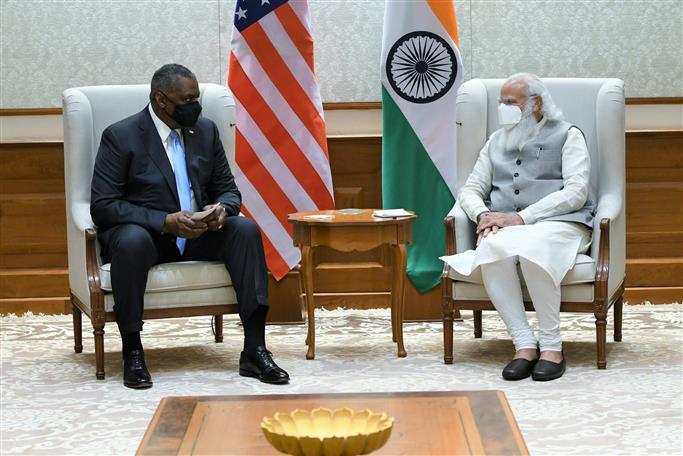 India and the US will have separate strategic and military demands for each other when he meets Defence Minister Rajnath Singh along with their delegations tomorrow. It could very well set the tone for cooperation and collaboration between the Quad countries — US, India, Australia and Japan — to address the challenges facing the Indo-Pacific region. Quad leaders had spoken through videoconferencing on March 12 and, as expected, China was on the agenda.

A joint statement is slated to be made at noon after the meeting, which will be the first major India-US interaction after Joe Biden took over as US President in January. General Austin will be in India till March 21. He arrived around 4.45 pm on Friday. While both sides are eager to work together, India will look to seek latest technology (robotics) and even joint partnership in making ‘micro-chips’ — the core of any electronic item like smart phone or TV. India is also keen on having an unmanned fighter jet. At present, India and US are running separate programmes on making unmanned fighter jets.

The US is likely to discuss with India the need to “operationalise” their “major defence partnership”, including intelligence sharing. Washington will seek an update on sales of armed drones and missile systems besides naval guns. The US and India are on the verge of an agreement on the sale of 30 armed drones of the “predator” family, made by General Atomics.

Besides PM, Gen Austin also met NSA Ajit Doval. Late at night, a US statement said Gen Austin commended India's leadership role in the Indo-Pacific and growing engagement with like-minded partners across the region. The two sides reaffirmed their commitment to promote a free and open regional order.