Second overseas visit by Putin since Covid; the first was for a summit with US President 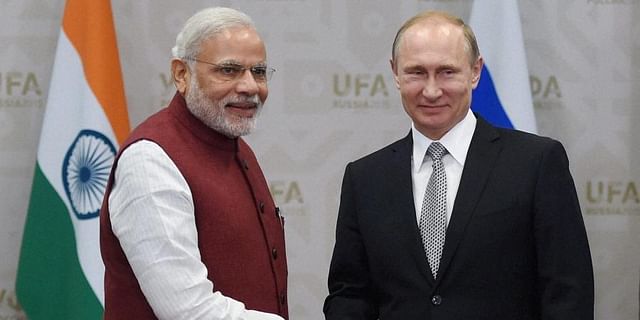 Prime Minister Narendra Modi will host Russian President Vladimir Putin at his residence on Monday for one-to-one talks that would mark the two countries breaking out of the straitjacket of an arms and petroleum relationship.

Putin, on just his second visit abroad after the outbreak of the Covid epidemic, and PM Modi will be discussing Indian forays in the Russian Far East for which New Delhi has already put up a $1 billion line of credit, the first by India for a developed country.

“We understand that the Russian Far East requires a lot of manpower. We want greater engagement with its Far East,’’ said sources while pointing out that India will in turn invite the Governors of Far East states to the Vibrant Gujarat Summit.

With massive reserves of gas, oil, timber, coal, diamonds and ceramics, the largely-untapped Russian Far East is seeing a race between China, India and Japan to join hands with Russian companies. It is also short of people and it is significant that Moscow has not made similar overtures of manpower to China which is next door.

This initiative will dovetail with two new maritime routes on which both countries intend partnering. One is the new and shorter shipping route to Europe via the Arctic Circle which will open due to climate change and the other is the Vladivostok-Chennai shipping route that will transport much of the timber and coal from Russia.

Recalling the “vivid memories” of Rakesh Sharma entering space in a Soviet rocket, the sources said that moment will occur again in 2023 with the launch of “Gaganyaan’’, India’s first space vehicle. Indian astronauts have already been training in Russia for over a year.

The Summit and the parallel meetings will look at prospects of long-term cooperation in space in areas like launch vehicle development. In nuclear energy too, they will weigh the options of completing work on all six nuclear plants at Kadankulam or announcing the next batch of six Indo-Russian nuclear power plants.

The two sides will also attempt to more closely coordinate their strategies on Afghanistan. Both countries had jointly backed the Northern Alliance against the Taliban in 2001 but had drifted apart on the question of unstinted support to the Ghani regime. Sources pointed out the ground has been prepared by two visits by Russian NSA Nikolai Patrushev which followed concurrence between PM Modi and Putin over phone to maintain a permanent communication link over Afghanistan right after the fall of Kabul.

Arms though will form an integral part of the relationship. Foreign Secretary Harsh Shringla had recently stated that without Russian spare parts and maintenance help, “our ships won’t sail, our planes won’t fly”.

The two countries are taking the US hints at ceasing defence ties in their stride. “We maintain strategic autonomy in defence. We have bought Rafales from France, Apaches from the US and are buying S-400 from Russia,’’ said the sources, while suggesting that the Indo-Russia logistics sharing agreement (LSA) may be ready for inking on the sidelines of the summit.

The summit, being held after two years, will overlap with the first-ever India-Russia 2 + 2 of their Foreign and Defence Ministers. Sources said this was a “natural fit’’ in Indo-Russian ties. “There is so much political dialogue and defence issues between India and Russia and there are many cross cutting issues. This forum is appropriate,’’ they said while denying the Indo-Russian 2 + 2 was being held simply to balance the Indo-US 2 + 2.