Had blocked Chandigarh-Bathinda NH near Rajindra Hospital since Friday 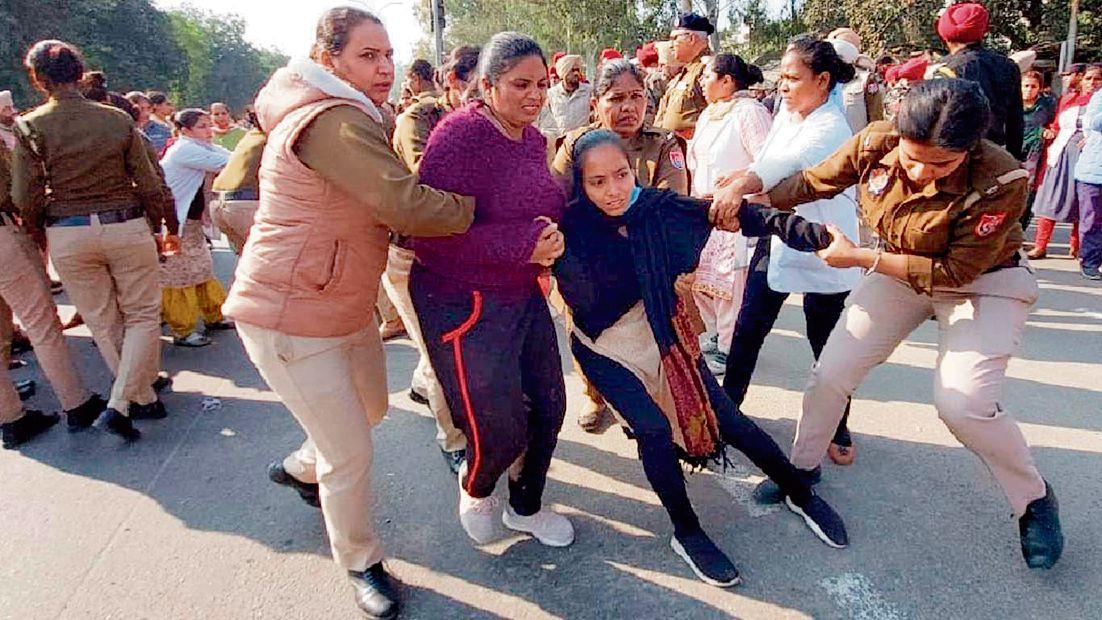 Outsourced Covid warriors, Class IV employees and nursing staff being detained by the police during a protest in Patiala on Saturday. Tribune photo: Rajesh Sachar

The district police today booked around 250 protesting outsourced Covid warriors and cleared the national highway which had been blocked by the protesters since Friday morning.The protesters were booked under Sections 283 and 509 of the Indian Penal Code and Section 8-B of National Highway Act. The Chandigarh-Bathinda national highway was blocked near Government Rajindra Hospital and traffic movement was badly disrupted.

Meanwhile, the protesters claimed that they had received injuries in the police action and the injured were admitted to Government Rajindra Hospital. In the counterclaim, the police said that force personnel were injured by the protesters.

In the afternoon, a large number of police personnel reached the protesting site and forcefully removed and detained the protesters. The protesters, including women, were thereafter taken away to different police stations, but were released later in the evening.

Sub Divisional Magistrate (SDM) Sanjeev Kumar, who was present at the protesting site, said, “The Medical Superintendent gave us in writing that health services at Rajindra Hospital were being affected due to the agitation. Following which, we had made the request to the protesters to clear the road, however, they didn’t oblige. Consequently, we did take action.”

Amanjot Kaur, one of the protesting Covid warriors, said, “The government seems to have turned blind eye towards our demands. During the Covid, we were offered garlands. However, the government is now taking us to the police stations.”

Jashanpreet Kaur, another outsourced Covid warrior, said, “We were hired last year after the Covid pandemic broke out and had been working during both the Covid waves. Once the Covid situation started getting back to normal, the government on September 30 asked us to go home. The government should give us jobs immediately.”

It is pertinent to mention that protesters have been on indefinite protest since October 25 on the main gate of Rajindra Hospital. Medical Education Minister Raj Kumar Verka had to leave in the middle of the scheduled programme during his visit to the hospital on November 26 following the massive protests by the outsourced Covid warriors.

The protesters— paramedical staff and nurses— said that they had continuously been given assurances of jobs by the government, but nothing had been done so far.

Meanwhile, later in the evening, farmers and some other organisations came out in support of the agitating workers and again blocked the highway.