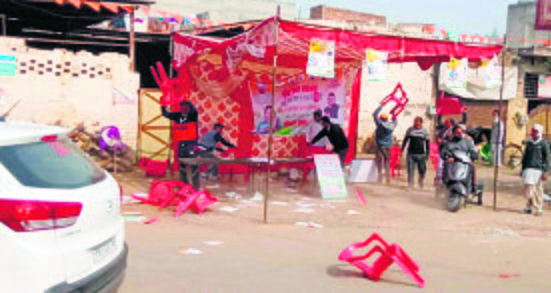 Miscreants ransack the help desk of a candidate during the municipal elections near a polling station in Samana on Sunday. file photo

The police have registered cases regarding violence during the Municipal Council (MC) elections at polling booths in Patran and Samana yesterday. The cases have been

A case, under Section 171-F (Undue influence or im0personation at an election), 353 (Assault or criminal force to deter public servant from discharge of his duty), 186 (Obstructing public servant and 427 (Mischief) of the IPC, and various sections of the Representation of People Act, has been registered at the Samana police station in this connection.

The police said they received information from the returning officer-cum-SDM, Samana, that some people were creating a ruckus at booth No. 22 and 23 of Ward No. 11 where voting machines were also broken. After receiving information a case was registered, the police added.

Another case was registered for assault or criminal force and undue influence during the MC election at Patran, the police said.

Some unidentified persons came to a polling station with covered faces and ransacked the place with rods and sticks the police added. According to Yashpal, presiding officer at Ward No. 8, booth No. 11, miscreants also took away the control unit of the EVM and tore some documents.

Meanwhile, the State Election Commission (SEC), Punjab, has ordered re-poll in all three polling booths of Patran and Samana Municipal Councils. The re-polling will be held on February 16.