Cracker ban goes up in smoke in Punjab 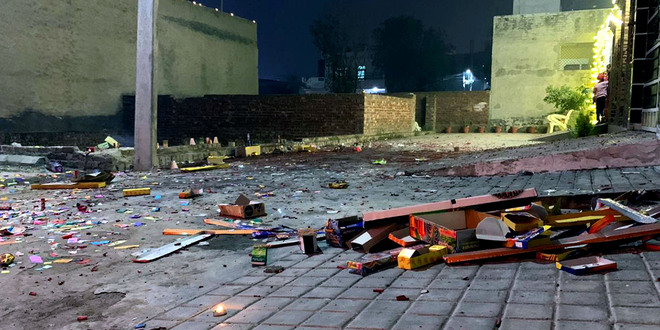 Empty boxes after Diwali celebrations in Amritsar; and a man bursts a cracker in Patiala. photos: Vishal Kumar & Rajesh Sachar

Despite a ban on traditional crackers, Punjab witnessed a drastic increase in the air pollution levels on Diwali, with the air quality of the state being in “very poor” category as compared to the “poor” category, registered in 2019.

A layer of haze and smog was visible in many cities and villages, as the two-hour window for bursting crackers went up for a toss. Crackers were burst till wee hours in most cities. According to the Punjab Pollution Control Board (PPCB), the air quality index (AQI) for Punjab in 2019 was recorded at 293 (poor) which reached an alarming 328 (very poor) on Saturday night.

The data collected from 7 am from November 14 till 6 am on November 15 showed that Amritsar and Ludhiana recorded the worst air quality with the levels of pollutants reaching 386 and 376, respectively. The home town of the Chief Minister, that also houses PPCB headquarter, also had the AQI of 334. Jalandhar saw AQI of 328 while Khanna was a little better at 281.

The industrial town of Mandi Gobindgarh, where residents flouted the ban on crackers, saw the air quality index reaching 262, a dip from last year’s 311.

Punjab witnessed a sharp increase in the levels of PM10 — tiny particulate matter of diameter 10 or less than 10 microns that can enter deep into the lungs and cause major damage to children, elderly and patients. As per data, the PM10 reading crossed 118 ug/m3 levels this Diwali. Last year, it stood at 90 ug/m3 on Diwali.

The levels of the most dangerous particles, called PM2.5, was 90 micrograms per cubic metre as compared to 43 in 2019, which is considered hazardous to breathe. Particulate matter smaller than 2.5 microns (or about a ten-thousandth of an inch) is particularly dangerous to health. Such particles are small enough to travel deep into the respiratory system, potentially impairing lung function.

To be considered safe, PM2.5 concentration less than 60 micrograms per cubic metre is considered safe. Experts suggest that the failure of the administration to put a check on non-green crackers and the violation of the time span fixed for bursting crackers can be established from the facts that the PM10 levels in four districts crossed the 500-mark, which can be life threatening if exposed for long. The AQI (PM10) was recorded at 500 in Amritsar, Jalandhar, Ludhiana and Patiala while it was 423 in Mandi Gobindgarh where the cracker ban turned to be ineffective.

“The high value of the AQI could be due to the atmospheric conditions (low temperature) prevailing during the season, resulting in reduced dispersion of the pollutants,” claimed PPCB member-secretary Karunesh Garg.