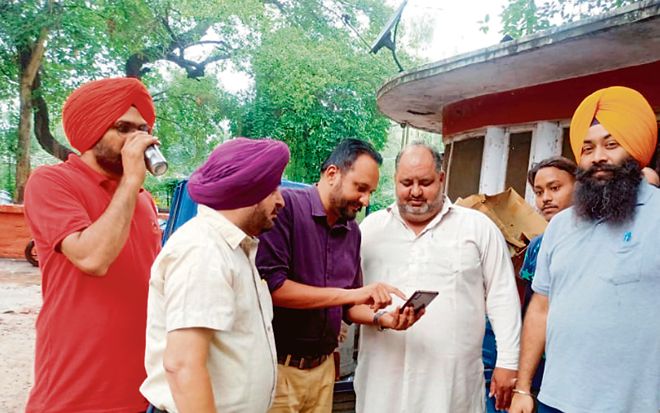 Teachers of government schools take part in an exercise to increase followers of the activity page of the Education Department on Facebook. Tribune photo: Rajesh Sachar

Government schoolteachers in the district took to streets today to get as large an audience as possible for the activity page of the Education Department on Facebook.

It was learnt that the teachers had been assigned their respective areas to get ‘maximum’ Likes in 24 hours. This exercise is being done purportedly under the guise of a healthy competition.

In fact, through the orders in some of the blocks of the district, school principals have been asked to put their staff members on duty to get a maximum of Likes.

In such an exercise, principal of the Government Co-ed Multipurpose Senior Secondary School, Passey road, has put his staff on duties to cover the Thapar University, DC Office, Environment Park and Gurdwara Dukhniwaran Sahib to get as many likes as possible from the residents.

Tota Singh, principal, Government Co-ed Multipurpose Senior Secondary School, said: “The idea is to get a maximum of likes on Facebook so that our (education department) efforts can reach maximum people. It will help us in propagating our achievements to a maximum of people.”

Meanwhile, slamming the exercise, Attinder Pal Singh, district president, Democratic Teachers Front (DTF), said: “This exercise is not what we have been appointed for. We strongly oppose this. It is shameful that teachers are being used like ‘salesman’.”

Vikram Dev, state president, DTF, said: “These are the non-productive activities, therefore, the department should refrain from such activities and do some substantive work such as providing the students with books.”