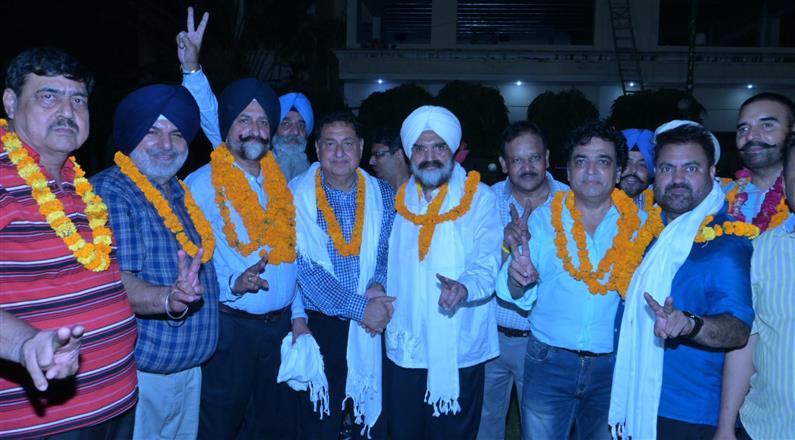 Deepak Kampani, newly elected president of Rajindra Gymkhana and Mahendra Club, along with winning members in a jubilant mood in Patiala on Friday. Photo: Rajesh Sachar

The Progressive United Group of the Rajindra Gymkhana and Maharani Club, Patiala, secured a clean victory on all 11 office-bearer and executive member posts of the club, votes for which were cast on Thursday.

Deepak Kampani has been elected president of the club. The elections were were earlier marred by uncertainty and apprehensions of postponement.

While Dr Manjit Singh was elected unopposed, Kampani defeated his counterpart Vikas Puri of the Gymkhana Goodwill and Welfare Group by a margin of 436 votes. Harpreet Sandhu defeated Vinod Sharma by a margin of 320 votes for the post of secretary. In the tie for joint secretary, Advocate Sherbir Singh polled 1,067 votes to defeat Rahul Mehta by 345 votes, while Gurmukh Singh Dhillon defeated Avinash Gupta by a margin of 86 votes to secure the post of treasurer.

Former president Dr Sudhir Verma said the club body had carried out a number of important works in the past nine months, including renovation of sports infrastructure and improving food quality along with increasing the club’s capacity.

He said they were successful in reducing the club’s deficit as well. He added: “The elections were carried out democratically and peacefully. The new team has been formed.”

Kampani said: “We have won all seats with a handsome margin. We will try to make the atmosphere more congenial with help of available infrastructure for all members.”

Secretary Sandhu said it was the club members’ victory. “We will now work to resolve various pending issues of members. Construction work will be minimised, rather we will focus on ensuring better provisions of food and other services. We will also ensure a disciplined environment.”

Losing presidential candidate Puri said: “We got only one day to campaign, but we thank voters for their support. It is the result of our work carried out during the last year. We will work to strengthen the group further.”