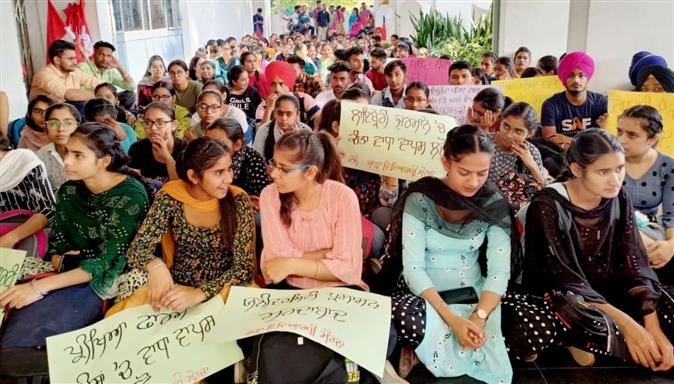 Students protest outside the VC’s office at Punjabi University in Patiala on Thursday. Rajesh Sachar

Students of Punjabi University held a protest today against the university’s decision to increase the fee of courses.

Students said: “The university has increased the tuition fee of all subjects, ranging from 3.4 per cent to 109 per cent. This increase in the course fee has led to a hike in the hostel fee and fee for courses at constituent colleges.”

Students associated with various organisations, including the All India Students Federation, Students Federation of India, Punjab Student Union, PSU (Lalkar), DSO and PRSU, participated in the protest. Students have also raised concern over the introduction of five-year integrated courses at the university. Students claimed a class of around 100 students was being taught by a single teacher at a time.

Asked why the protest started more than three months after the university took the decision, students said classes for courses whose fee had been hiked were not being held at the time. “The classes have started now and the fee has been increased for new admissions. The same will be collected at the onset of the upcoming semester,” they said.

They said: “There is an extreme lack of rooms and basic amenities in the hostels. We want the university administration to roll back the increment in course and other fee, reduce the fee of newly introduced courses, construct new hostels for students and fill vacant seats in PhD courses.”

Students also demanded the release of fellowship of students along.