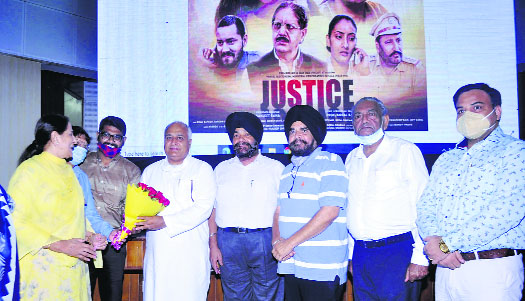 Mayor Sanjeev Sharma being welcomed at the screening of ‘Justice’, a short film, at the MC auditorium on Friday. Rajesh Sachar

A short film on rape and the society’s attitude towards the victim was presented by Kala Kriti, Patiala, at the Municipal Corporation office here this evening.

The film, titled ‘Justice’, has been produced and directed by Parminderpal Kaur.

It revolves around a college-going girl who is raped by one of her friends. She finds no solace as she goes around seeking help from members of the society, including politicians and the police. At the end, she took it on her own to seek revenge from her violator.

The short film showcases how women are treated in a male-dominated society. The story also highlights discrimination on the basis of caste as the girl’s violator tells her that he was miffed at her relationship with one of her friends, who belonged to the ‘other’ caste.

The story, screenplay and dialogues of the film have been written by noted Sahitya Akademi awardee Kirpal Kazak. Ranjeet Rana is the associate director of the film.