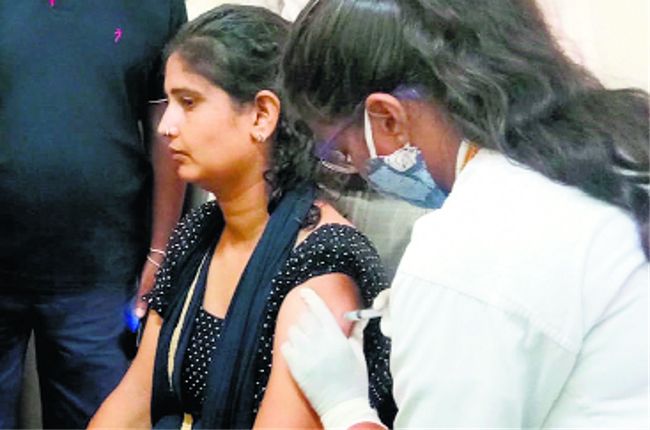 A health worker administers the Covid vaccine to a woman in Patiala on Wednesday. Tribune photo: Rajesh Sachar

Though Covid-19 vaccination has picked up pace in the district, women seem to be lagging behind in the inoculation drive. The Health Department informed that around 12.20 lakh doses of the vaccine had already been administered in the district. Of 12.20 lakh doses, around 6.66 lakh are men, while 5.53 lakh are women. There is a gender gap of around 1.10 lakh. The health experts believed that the gender gap was higher in the rural area.

Rumours of side effects of vaccination on reproductive organs are said to be the reason for the vaccine hesitancy among women. Besides, pregnant and lactating women were given go ahead for the vaccination by the government at very late stage of the drive which also contributed to the gender gap.

Dr Veenu Goyal, District Immunization Officer, said, “The gap of gender difference has already narrowed down. Special efforts are being made to give vaccination thrust in the rural areas. Special awareness camps are being organised for women to bring them forward for the vaccination.”

Meanwhile, it has been learned that Covishield is the most preferable vaccine among the beneficiaries. Around 91 per cent beneficiaries have received doses of Covishield while the remaining received Covaxin.

Patiala, on Wednesday, administered 1,972 doses of the Covid vaccine. The Health Department said they would be holding a mega vaccination drive on Thursday.