He had applied for the post for Member, Child Welfare Committee, Jalandhar 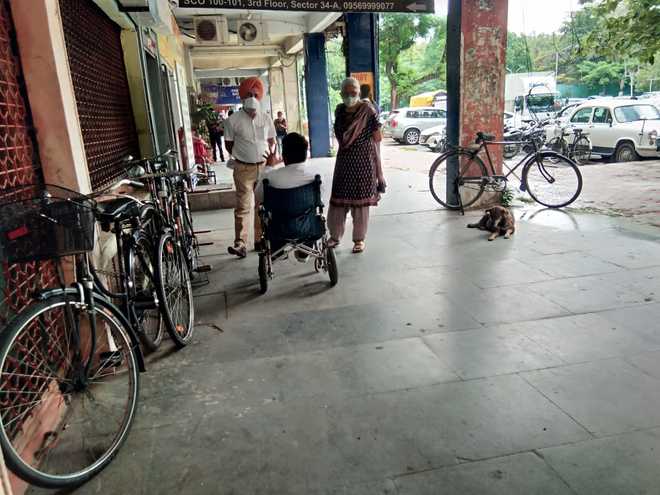 Vivek Joshi being interviewed by a panel on the ground floor.

A feted specially abled activist, who had applied for the post for Member, Child Welfare Committee, Jalandhar, had to undergo the ordeal of getting interviewed in the corridor, all because of a broken lift and the absence of a ramp to access the first floor office of the Social Security and Women and Child Development in Chandigarh.

Interviews aren’t held on roads. It’s humiliating. I was told arrangements will be made. I waited in an unkempt spot, while other candidates were sent upstairs.

Vivek Joshi (40), with 100 per cent cerebral palsy, was interviewed in an open passage of the building outside shops amidst a slumbering stray dog and parked cycles.

Joshi had to be lifted up by his 67-year-old mother and a student to the ground floor passage, as there was no other way to access it. He also had to relieve himself in his car (in a disposable urination pot) in the absence of a bathroom.

On Friday, Joshi had sent an email to the department informing it about his condition and seeking “suitable arrangement”.

Will have better infra

We have written countless letters to get the lift fixed. We are also shifting to a new office with better accessibility. We are improving the infrastructure.

Vivek said: “It is all about dignity. Interviews aren’t conducted on roads, there’s a dog here. It’s humiliating. I was told arrangements will be made. My mother and a student had to lift me up to access the passage. I waited in an unkempt spot, while other candidates were sent upstairs. I was finally interviewed for about 5 to 7 minutes.”

Amarjit Singh Anand, state disability activist, said: “It’s an irony, a social security office isn’t accessible to the disabled that it claims to represent. Joshi is an acclaimed fighter for the specially abled. At least a table could have been arranged.”