27.25-m flag bears the names of 116 farmers who have died in agitation 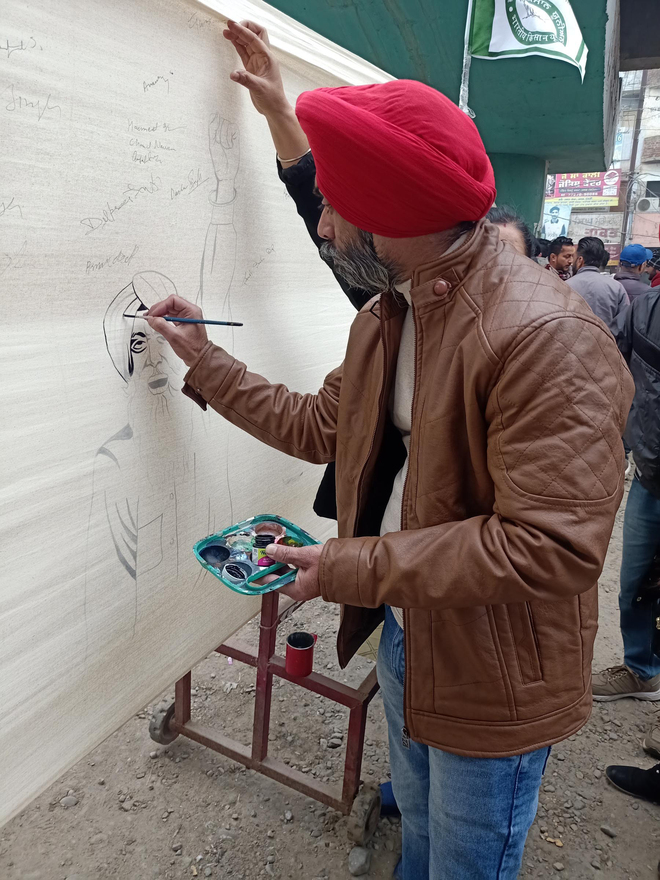 As the flags of farmer unions linked to the ongoing agitation against the central farm laws are becoming popular among the masses in Punjab, Haryana and other states, a Moga-based artist, Gurpreet Singh Komal, has made a big flag on a white canvas displaying the spirit of the farmers. He has written the names of at least 116 persons in golden colour who have died in the farmers’ struggle in the past five months.

Since the farmers’ movement is gaining strength by the day in the northern parts of the country, particularly in Punjab and Haryana, Komal thought of preparing a big flag emblematic of the support of the artists’ community.

The flags of farmer organisations are in great demand these days. The youth in particular are hoisting it on their vehicles and atop their houses across the region.

Komal said the movement of farmers could be compared with the ‘Flag Satyagraha’ of 1923 led by Mahatma Gandhi, in which the nationalist flag was hoisted along the Ravi.

The ‘Flag Satyagraha’ began from Nagpur and Jabalpur and continued for several months in 1923. Demanding the right to hoist the nationalist flag caused an outcry across India, especially after Gandhi was arrested by the British government. Ultimately, the British negotiated an agreement permitting the protesters to conduct their march unhindered along with their flags. Other notable ‘Flag Satyagraha’ was organised in Mysore in 1938.

The flag prepared by Komal weighs 5.25 kg. The length of the flag is 27.25 metre while the width is 4.50 metre. He has left an open space on the flag to carry out a signature campaign in favour of the repeal of the controversial agriculture laws.

In the middle of the flag, the artist has drawn the picture of a typical farmer showing his hard work and dedication to work in the fields. He has drawn this picture using green colour, which is symbolic of ‘patriotism’ in the farmers’ movement.

After filling the open space of this flag with the signatures of common people, this flag will be taken to Delhi for hoisting in the proposed January 26 tractor march, Komal told mediapersons.