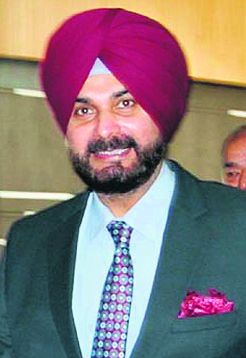 Gurdaspur: Navjot Singh Sidhu had earned the epithet ‘the eternal comeback man’ for the numerous ones he had scripted while playing for his country. These days, he is again trying to make a comeback, but this time in the political arena. Sidhu is regularly seen visiting mandis and sand quarries. His party men claim he is doing so “just to remain relevant in the state politics”. Nevertheless, what is rankling Congressmen is the modus operandi he has adopted to remain visible. He carries with him “excess baggage in the form of a motley group of party men who have lost the polls”. His colleagues claim he is “trying to form a party within the party”. An ex-Cabinet minister said, “He has outlived his utility. He brought us down from 80 to 18. His contribution to the party is zilch. We will ensure he remains politically irrelevant.” What he forgot was that writing off maverick Sidhu is a risky proposition.

Sangrur: After a few IAS aspirants and other students met DC Jitendra Jorwal recently and complained about the lack of facilities in the district library, the latter acted quickly and arranged three ACs with the help of Ricela Foundation. “Apart from three ACs, I have assured all students that we will make best efforts to give them the required environment to prepare for their exams,” the DC said. Students are also heaping praise on Jorwal.

Patiala: The Patiala Foundation — an NGO working to create awareness to save ancient monuments through heritage walks, have now raised the issue of thousands of residents who want to pay homage to the founder of the Royal City, Baba Ala Singh. NGO chief functionary Ravee Ahluwalia and senior member Harpreet Sandhu met Tourism Minister Harjot Singh Bains at Quila Mubarak and demanded that digital darshan of the holy Dhuni and Jyot be made available on the premises. The minister said he would soon ask the officials concerned to ensure that the public is able to pay homage to the city’s founder. DC Sakshi Sawhney also assured all possible help from the district administration.