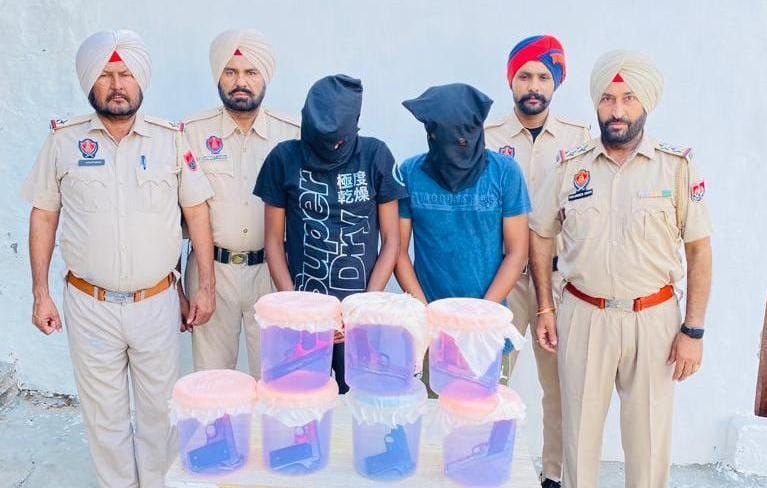 The aides of Goldy Brar in police custody in Bathinda on Tuesday.

In a joint operation, the Anti-Gangster Task Force (AGTF) and the Bathinda police arrested two close aides of Goldy Brar and Anmol Bishnoi when they were attempting to escape to Haryana via Pathrala village, said DGP Gaurav Yadav here today.

Those arrested have been identified as Malkit Singh, alias Kitta, of Bhaini village and Hardeep Singh, alias Mamma, of Akalia Jalal village. Both are historysheeters and wanted by the Punjab Police in several cases of heinous crimes.

The police have also recovered seven pistols (six .32 bore and one .30 bore) along with ammunition and a police uniform from their possession. Cops have also impounded their motorcycle using which they were trying to escape.

Giving details, the DGP said they got a tip-off that Brar’s two aides were trying to escape on a bike. Later, the AGTF along with police laid barricades at a link road of Pathrala village and nabbed both of them. Preliminary investigation revealed that the arrested persons, on directions of Brar, had unsuccessfully attempted to murder Rajasthan-based gangster Kailash Manju at Jaisalmer when he was out on bail, he added.

Besides this, the DGP said the arrested persons had also unsuccessfully tried to kill three associates — Dagar, Fateh Nagar and Kaunsal Chaudhary, of gangster Sukha Duneke when the Nakodar police had brought them on production warrant in connection with kabbadi player Sandeep Nangal Ambia murder case.

Not ruling out the connection of the two persons in the Sidhu Moosewala murder case, the DGP said the police were probing it. Meanwhile, an FIR has been registered under Sections 25 (1)A/54/59 of the Arms Act at the Sangat police station. — TNS