Crowd support made No. 1 cry 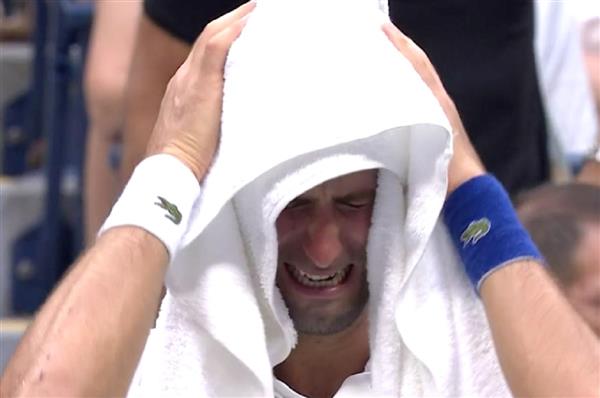 Novak Djokovic cries late in the third set as he stared at a defeat.

Novak Djokovic’s loss in the US Open final denied him a calendar-year Grand Slam but the Serbian world No. 1 said he was just happy his chase for perfection was finally over.

Djokovic was left in tears after his bid to become the first man since 1969 to win the year’s four Grand Slam ended.

“Relief,” the 34-year-old Djokovic told reporters when asked what his emotions were after the match. “I was glad it was over because the build up for this tournament and everything that mentally, emotionally I had to deal with throughout the tournament in the last couple of weeks was just a lot. It was a lot to handle.”

“Of course, part of me is very sad. It’s a tough one to swallow, this loss, I mean, considering everything that was on the line. But on the other hand I felt something I never felt in my life here in New York. The crowd made me (feel) very special. They pleasantly surprised me,” an emotional Djokovic.

Since his 2015 Wimbledon triumph, Djokovic had won 12 of his past 14 Grand Slam singles finals, losing only to Spain’s Rafael Nadal at the French Open last year and Swiss player Stan Wawrinka at Flushing Meadows in 2016.

“The amount of support and energy and love I got from the crowd was something that I’ll remember forever. That’s the reason on the changeover I just teared up,” he said. “The emotion, the energy was so strong. It’s as strong as winning 21 Grand Slams.” — Agencies