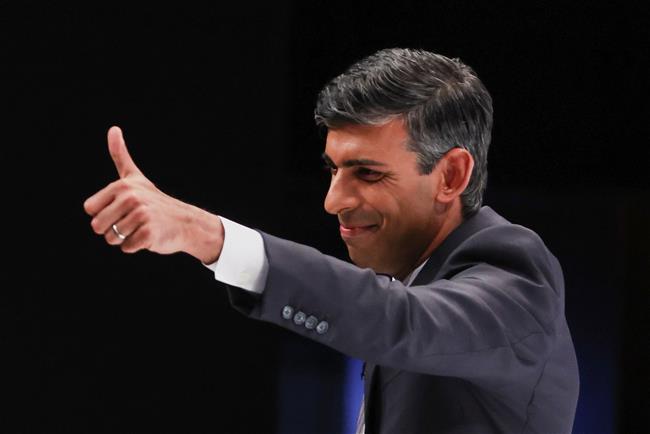 British Prime Minister hopeful Rishi Sunak on Thursday said he is excited to keep going in the Conservative Party leadership campaign even as surveys of party voters predict a firm lead for his rival, Foreign Secretary Liz Truss.

In an interview with the ITV channel’s ‘This Morning’ programme, the Indian-origin former Chancellor said he “definitely” had a shot at victory as he reiterated his stance that his rival’s instant tax-cutting plans would prove inflationary for the economy.

“I’m really excited to keep going, I think my ideas are the right ones,” he said.

Earlier on Thursday, a new YouGov poll for ‘Sky News’ showed Truss holding on to a solid 32-point lead in the race and other surveys of Tory members who will be voting in this election have shown a similar tilt in favour of Sunak’s opponent.

During a wide-ranging discussion on ITV, the ex-minister in Boris Johnson’s Cabinet admitted it was a “bit odd” that his former boss took days before announcing his resignation as Tory leader and British Prime Minister last month in the wake of a deluge of ministerial resignations following his own early exit.

“In the end it went on for a couple of days – it was a bit odd. I think people watching it were wondering what was going on,” he said, with reference to the political high drama at Downing Street in early July which ultimately ended with Johnson announcing his decision to quit and triggering the leadership election.

Johnson’s ministers resigned one after the other early last month after weeks of crisis over the partygate scandal of lockdown law-breaking parties under his watch and a few other scandals involving his close aides. While Sunak acknowledged that having his Chancellor quit was a big blow to Johnson’s leadership, he stressed that it was “not the end of the world”.

“The thing that changed it was when 60 members of government all resigned and that happened over the course of a day,” he pointed out.

The former finance minister, who has previously also admitted that his ex-boss has not taken any of his calls or messages, said the reaction was understandable.

“I’ve reached out to him but understandably he’s not replied. That’s fair but it wasn’t just me, at the end of the day, 60 other members of the government all resigned as well,” he said.

On the key campaign issue of tackling the country’s cost-of-living crisis, Sunak renewed another previous assertion that he would “rather lose” than “say things that can’t be delivered”.

“I haven’t made my life easy, saying things maybe some people don’t want to hear. It should be about under-promising and over-delivering, that’s how you restore trust in government and politics,” said Sunak.

“We’ve probably not had enough of that. That’s why in this leadership race I’ve not been making lots of easy promises that I think are false, I’d rather lose than say things I don’t think can be delivered, I’d rather be honest with people,” he said.

11 hours ago
2
Punjab The Tribune Impact