Israel fought a 2006 war against Hezbollah guerrillas, who have sway in southern Lebanon 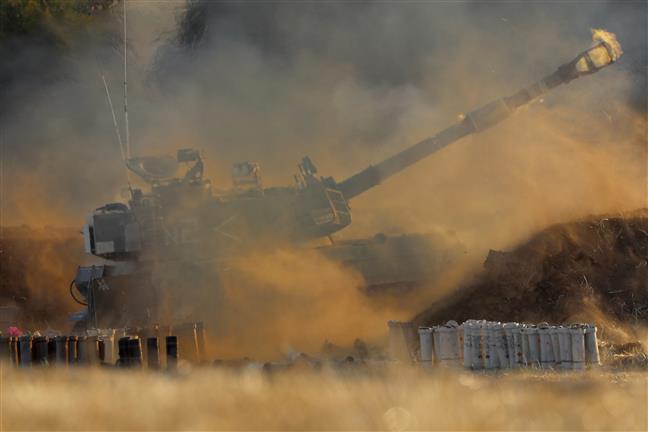 Israel fought a 2006 war against Hezbollah guerrillas, who have sway in southern Lebanon. Reuters photo.

Six shells were fired from Lebanon towards northern Israel on Monday but fell short of crossing the border, the Israeli military said.

It said that in response, artillery was fired at "the sources of the launches" in Lebanon.

A Lebanese security source said shells were heard being fired from south Lebanon and efforts were being made to identify the location. The source said about 22 shells were fired by Israeli artillery on Lebanese territory.

The United Nations Interim Force in Lebanon said it had detected rocket fire from around Rashaya Al Foukhar in southern Lebanon.

"UNIFIL Head was immediately in contact with counterparts in the Lebanese army and IDF commands urging the parties to exercise maximum restraint in order to prevent any escalation of the situation. The IDF has now stopped the fire," the mission wrote on Twitter. "The situation in the area is now calm." There were no reports of casualties or damage, and the shelling did not appear to signal the opening of a new front in Israel's fighting with militants in the Gaza Strip.

The Lebanese shelling caused Israeli air raid sirens to blare near the kibbutz of Misgav Am, along Israel's northern border with Lebanon.

It was the second incident of cross-border fire in the past week. On Thursday, three rockets were launched from Lebanon toward northern Israel on Thursday but landed in the Mediterranean Sea, causing no damage or casualties.

Israel fought a 2006 war against Hezbollah guerrillas, who have sway in southern Lebanon and access to advanced rockets.

The border has been mostly quiet since then.

Small Palestinian factions in Lebanon have fired sporadically on Israel in the past. Reuters