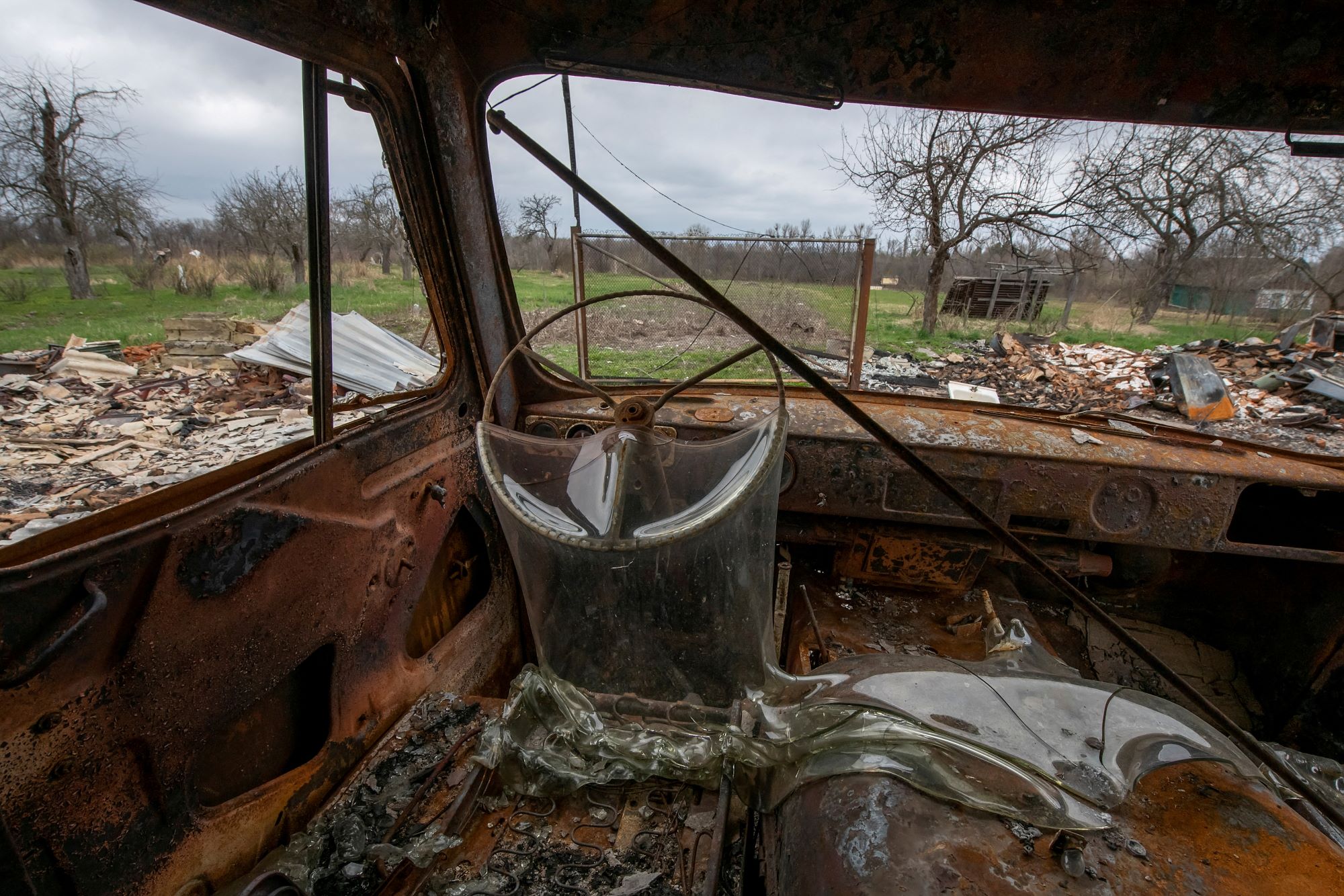 A view of a car destroyed by a military strike, during Russias invasion in the village of Kukhari, in Kyiv region, Ukraine April 16, 2022. REUTERS

Ukrainian authorities said a Russian missile attack killed seven people in Lviv on Monday, the first civilian victims in the western city, while its forces were preventing Russia from taking full control of the port city of Mariupol in the east where the situation was “extremely difficult”.

Lviv governor Maksym Kozytskyy said preliminary reports suggested four hits on Lviv, which is just 60 km (40 miles) from the Polish border—three strikes on warehouses that are not currently being used by the military, and another on a car service station.

“It was a barbaric strike at a service station, it’s a completely civilian facility,” he told a news conference.

Andriy Sadoviy, mayor of Lviv, said the youngest victim among the seven killed was aged 30. The blast also wounded 11 and shattered windows of a hotel housing Ukrainians evacuated from elsewhere in the country, he added.

“Seven peaceful people had plans for life, but today their life stopped,” the mayor said.

Russia denies targeting civilians in what it calls a special operation to demilitarise Ukraine and eradicate what it calls dangerous nationalists. It rejects what Ukraine says is evidence of atrocities and says Ukraine has staged them to undermine peace talks.

Russia’s defence ministry said it had hit hundreds of military targets in Ukraine overnight. It said it had destroyed 16 Ukrainian military facilities in the Kharkiv, Zaporizhzhia, Donetsk and Dnipropetrovsk regions and in the port of Mykolayiv, in the south and east of the country, with air-launched missiles.

It added that the Russian air force had launched strikes against 108 areas where Ukrainian forces were concentrated and Russian artillery struck 315 Ukrainian military targets.

Driven back by Ukrainian resistance in the north, Moscow has refocused its ground offensive in the two eastern provinces known as the Donbas, while launching long-distance strikes at other targets, including the capital, Kyiv.

It is now trying to take full control of Mariupol, which has been besieged for weeks and which would be a huge strategic prize, linking territory held by pro-Russian separatists in the east with the Crimea region Moscow annexed in 2014.

The Office of the UN High Commissioner said on Monday that the civilian death toll from the war in Ukraine had surpassed 2,000, reaching 2,072 as of midnight on 17 April from the start of the Russian invasion on Feb. 24.

The situation in Ukraine’s besieged southeastern port city of Mariupol is “extremely difficult” but the city has not been taken under full control by Russian forces, a spokesman for Ukraine’s defence ministry said on Monday.

Spokesman Oleksandr Motuzyanyk also said that bombing runs by Russian military aircraft had increased of late by over 50% and that Ukraine’s infrastructure had come in for increased targeting.

Ukraine called for Russia to facilitate a humanitarian corridor for evacuees from Mariupol and one from the steel plant that is the city’s last significant area of Ukrainian resistance.

“We demand an urgent humanitarian corridor from the territory of the Azovstal plant for women, children and other civilians,” Deputy Prime Minister Iryna Vereshchuk said in a post on the Telegram messaging service.

The Azovstal steelworks are one of Europe’s biggest metallurgical plants, covering more than 11 sq km (4.25 sq miles) and overlooking the Sea of Azov.

Mariupol city hall posted on its Telegram account a letter to Pope Francis from Major Serhiy Volyna, commander of Ukraine’s 36th marine brigade which is still fighting in the city, and appealing for help.

“I don’t have much time to describe all the horrors that I see here every day. Women with children and babies live in bunkers at the (Azovstal) plant. In hunger and cold. Every day under the gunpoint of enemy aircraft. Every day the wounded die because there are no medications. No water, no food... Help save them.”

Two captured British men who fought with Ukrainian forces in Mariupol appeared on Russian state TV on Monday and asked to be exchanged for pro-Russian politician Viktor Medvedchuk who is being held by Ukrainian authorities.

It was unclear how freely the two men - Shaun Pinner and Aiden Aslin - were able to talk.

Medvedchuk, meanwhile, was shown in a video released by Ukraine’s SBU intelligence service asking to be swapped for the defenders of Mariupol and citizens struggling to leave. It was also unclear how freely Medvedchuk was speaking.

On the streets of Mariupol, small groups of bodies were lined up under colourful blankets, surrounded by shredded trees and scorched buildings.

Residents, some pushing bicycles, picked their way around destroyed tanks and civilian vehicles while Russian soldiers checked the documents of motorists.

On the eve of the war, Mariupol was the biggest city still held by Ukrainian authorities in the Donbas, which Moscow has demanded that Ukraine cede to pro-Russian separatists.

Taking Mariupol would unite Russian forces on two of the main axes of the invasion, and free them up to join an expected new offensive against the main Ukrainian force in the east.

About 4 million Ukrainians have fled the country, cities have been shattered and thousands have died since the start of the invasion on February 24.