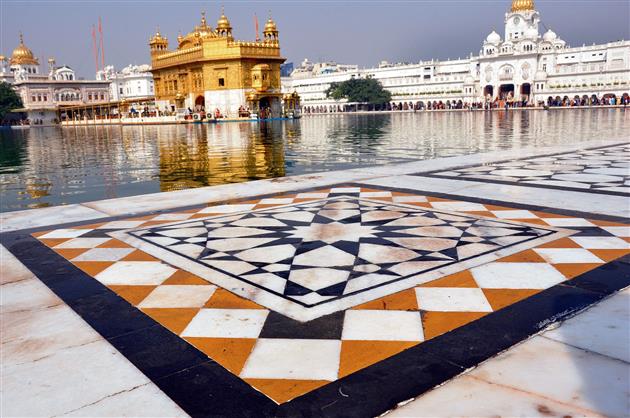 The marble used at the Darbar Sahib is of different hues, mainly white black yellow and green-cum-grey.

The Golden Temple is a marvel of creativity but what makes it more attractive is the art work that adorns the walls, ceilings and floor on the complex. Tribune Correspondent Charanjit Singh Teja and photojournalist Sunil Kumar take you to the pious site of Sikhism tracing down the history of the art

ART work representing rich Sikh architecture in all its distinctive features adorn the walls and floor of Darbar Sahib. Sikh philosophy, lifestyle and their art is beautifully expressed on the marble, frescoes (in mohrakashi), golden plates and murals at the holy shrine. The existing building of Darbar Sahib and Darshani Deorhi (entrance) was reconstructed in 1765 by misl sardars after beating Afghan invader Ahmad Shah Abdali. The art work on marble and gold was done in Maharaja Ranjit Singh’s era. He, after founding the Sikh Empire, rebuilt it in marble and copper in 1809, and overlaid the sanctum with Gold foil in 1830. This has led to the name — the Golden Temple.

The marble pavements (parikrama) was also built during the Sikh rule. However, the parikarma was extended by the SGPC in 1950-55 and several other buildings were reconstructed in the past few decades, but the 18th century art patterns, designs and styles were followed. The building of Akal Takht, which was damaged by the Indian Army in 1984, also has great art work.

The ‘naqqashi’ and marble art was restored at the new building of Akal Takht, Gurdwara Thara Sahib and Shaheedi Yaadgar on the Golden Temple complex in the last two decades.

The marble used at the Darbar Sahib is of different hues, mainly white black yellow and green-cum-grey. Commonly called Kota stone, but, it comes from various locations of the country including Agra, Jaipur Jaisalmer, Bombay, Kolkata, Madhya Pradesh and Madras. 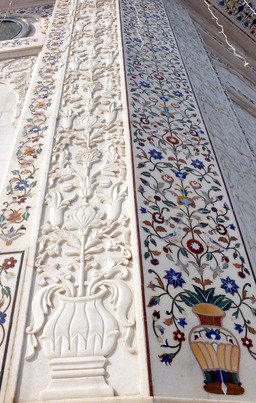 The slabs on the floor have been replaced several times in the past as the life of this marble is not more than 60 years and it needs replacement. However, the design is restored each time it is replaced. The marble laid in round, rectangular and square panels and a variety of attractive designs can be seen on the floor while doing the parikarma. The marble in several colours enhances the grace of these panels. 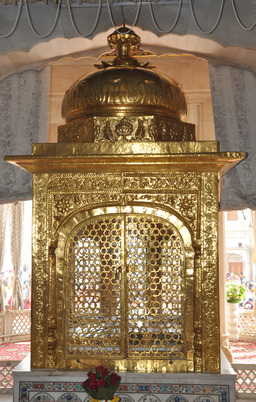 During the Khalsa rule, Maharaja Ranjit Singh covered the Darbar Sahib with gold plates by using 162-kg gold. Gold sheets have been laid on the doors and windows. 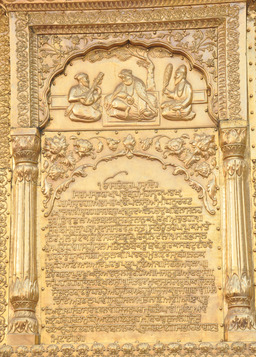 The art work on gold is awe-inspiring. The holy text, trees, birds and sadhus were embossed on copper panel and gold was veneered on these. 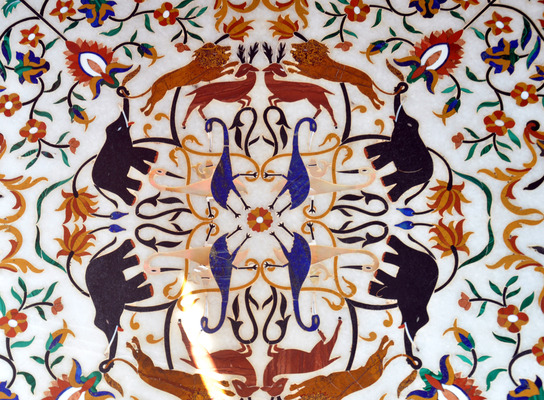 Jaratkari — the art of engraving coloured stones in marble — is quite common at Darbar Sahib. It enhances the beauty of the holy building.

Most of the stones used for Jaratkari are natural stones brought from various areas of Rajasthan. Neelam, Nag, Surkha, Lajwart, Kattu are some of the stones that have been used on the temple complex.

Jaratkari — the art of engraving coloured stones in marble — is quite common at Darbar Sahib. It enhances the beauty of the holy building. Most of the stones used for Jaratkari are natural stones brought from various areas of Rajasthan. Neelam, Nag, Surkha, Lajwart, Kattu are some of the stones that have been used on the temple complex. 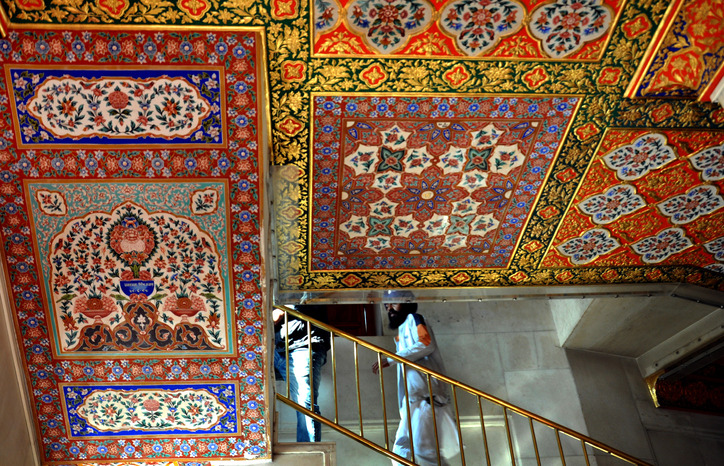 Naqqashi is a prominent art on the temple complex. There is a rich tradition of Sikh Naqqashi, which was majorly inspired from Kangra School of Art. 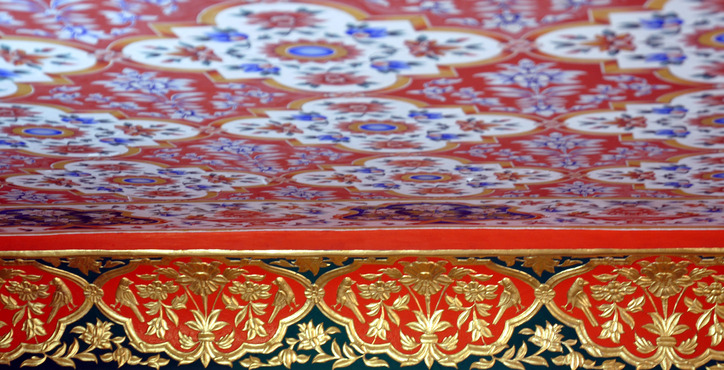 The walls and ceilings of Akal Takht buildings had great work of naqqashi, which was damaged in 1984. The SGPC restored the art work on the walls and roofs after re-constructing the building. 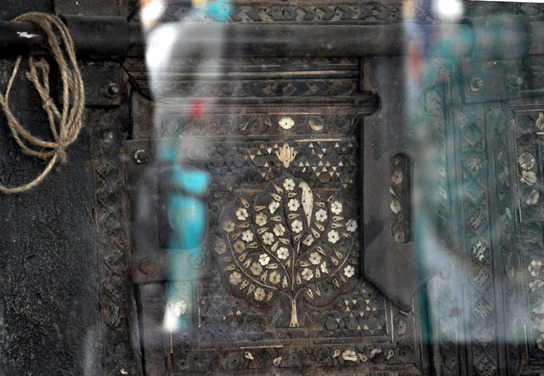 The old wooden gates of Darshani Deorhi were replaced with new ones a few years ago. Now, the old gates with ivory are being displayed nearby on the complex. Legend has it that Turk invader Mahmood Gaznavi looted the wooden gates from Somnath Temple in the south and took it to Kabul. Maharaja Ranjit Singh recovered these gates and got it fixed at Darshani Deorhi. However, the 8-feet wide and 10-feet high wooden gate has rectangular panels inlaid in artistic ivory work. 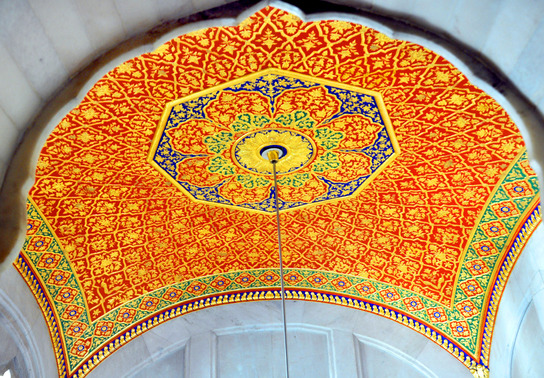 The ceilings of Darbar Sahib and Akhal Takht buildings have been decorated with Tukri work. Mirrors of small sizes have been engraved on some walls and ceilings. This form of art is from Mughal era, where they used to construct the Sheesh Mahal. 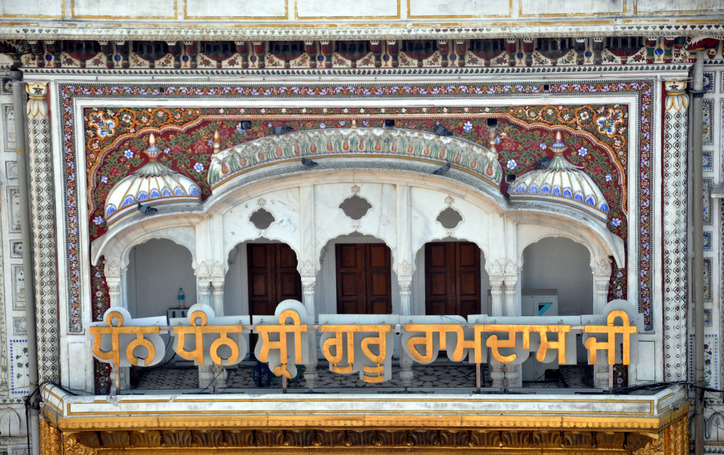 The architecture of Darshani Deorhi is extremely impressive. The frescoes were made with dry pigments.

The flowers, birds and animals were painted with attractive colours. There are a variety of colours but mainly red, green, black, white, blue and yellow. All these were natural pigments collected from stones, plants and clay.

(With inputs from the book The Golden Temple: Past and Present by Dr Madanjit Kaur, former professor GNDU)