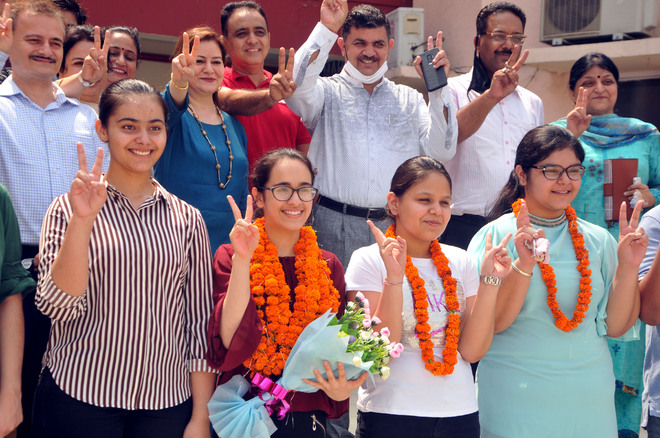 savouring success: Deepanika Gupta (2nd from left), a student of DAV International School, celebrates with her family and friends after she topped the district with 98.4% marks, in Amritsar on Wednesday. tribune photo: vishal kumar

Girls once again outperformed boys in the CBSE Class X examinations, the results of which were announced on Wednesday.

Deepanika Gupta from DAV International School emerged as the district topper with 98.4 per cent marks. Coming from a family of academicians, her father Amardeep Gupta is the principal, DAV College, Dasuya, and her mother Jijina Mahajan is a professor at BBKDAV College in the city. Deepanika scored 492 marks out of 500.

The second position in the city was jointly shared by Mehr Sethi of DPS and Sirjanpreet Kaur of Spring Dale Senior School, who both scored 98.2 per cent marks. The third position in the city too was shared by Harkirat Chaddha of DAV Public School, Saanvi of Police DAV Public School and Avneet Kaur of DAV International School who scored 98 per cent marks.

Excited over their excellent results, the achievers and their families termed this year’s results overwhelming and encouraging. “The results were overwhelming for us as a family for so many reasons,” shared Amardeep Gupta, father of district topper Deepanika.

“Since the lockdown and cancellation of exams by the CBSE due to the Covid-induced crisis, the students were under a lot of stress. But the results have motivated them towards their academic future ahead,” he said.

Sirjanpreet said she had expected good results, but emerging among the top three positions in the city is like an icing on the cake.

Manmeet Singh, father of Mehr Sethi, said the results had relieved students and their parents of undue stress. “The past few months have been quite stressful as there was a lot of uncertainty. Also, we were wondering how the assessment would be done for the exams this year and if it would do justice to the hard work done by the children.”

Post the results, the top rankers in the city are working towards their future academic goals. A Class XI student at DAV International, she wants to go for the non-medical stream and pursue engineering in future. She credited her academic success to her own hard work as she did not take any coaching or tuitions from any institute.

Mehr Sethi and Sirjanpreet, joint second position holders, want to pursue a non-science career. Mehr wants to become a CA and her goal is to get admission in SRCC, the best commerce college in the country. Sirjanpreet wants to pursue psychology as she finds it an interesting subject with immense potential.

The only boy among the top three achievers in the city, Harkirat Chadda, who scored 98 per cent marks, wants to take up non-medical and pursue research in the field of artificial intelligence.

Raghav Khanna from Shri Ram Ashram School scored 97% marks, followed by Bhavya who got 96.2%. Among other achievers were Shivay Gupta, Hardik Sharma, Lovisha Mahajan, Bhavika Arora and Rishabh Sharma from Bhavan’s SL school who scored 95% marks. Sharanpreet Kaur from Khalsa College Public School was among the top scorer of the school with 94.4%.