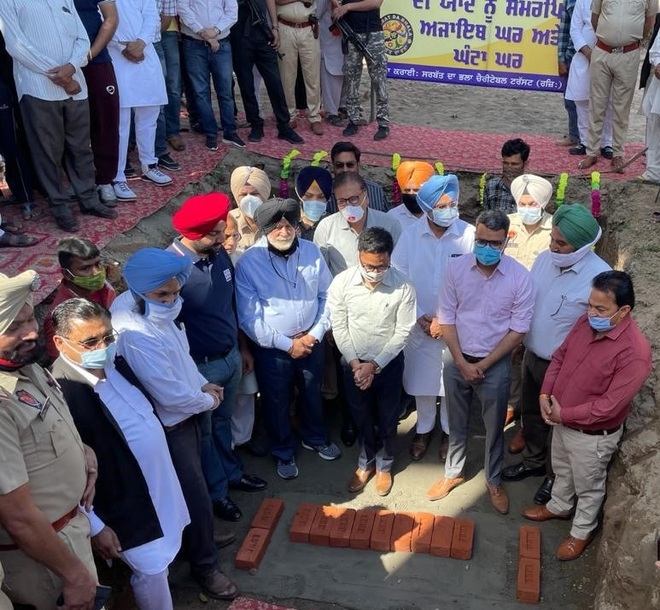 Finally, after numerous hiccups and false starts, work to construct Banda Singh Bahadur memorial at the historical township of Kalanaur has commenced. In these days of Covid induced paranoia, where ministers are loath to physically attend functions, Chief Minister Capt Amarinder Singh did a virtual inauguration of the project several weeks ago. Later, the venture threatened to slip into oblivion, but for efforts of Dr Satnam Singh Nijjar, chairman of the Gurdaspur Planning Board. Nijjar successfully negotiated with the Punjab Wakf Board, which has leased part of its land for the construction and managed to pull the memorial out from gallows. The venture is being funded by construction magnate Surinder Pal Singh Oberoi, who flew in from Dubai for Friday’s ceremony. The function was attended among others by Cabinet minister Sukhjinder Singh Randhawa and officials of the district administration. Oberoi is spending close to Rs 2 crore just to ensure youngsters remember the great Sikh warrior. “Agreed that Banda Singh Bahadur is history, but I will like to inform the younger generation- mobile and internet ones- that if you do not know history, then you do not know anything. You are a leaf that does not know it is actually a part of a tree. For many, history is just a registry of crimes and follies committed by society. Not for me. For me, it is the very base on which civilisations exist. A generation which ignores history has no past and will have no future,” said Oberoi. The businessman also disclosed that a reputed Mumbai- based filmmaker has decided to produce and direct a film on him. He said Akshay Kumar would be playing the lead role. On the occasion, Oberoi donated Rs55-lakh luxury bus to the district administration. The vehicle would enable people to visit religious places in Gurdaspur district, including Kandh Sahib Gurdwara, Achleshwar Temple, Chotta Ghalughara Sahib Gurdwara and Kartarpur Corridor for free. It will ply on Amritsar-Gurdaspur route on a weekly basis. Keeping in view his contribution, Deputy Commissioner Mohammad Ishfaq, in the fitness of things, requested the businessman to flag off the bus. As Oberoi waved the green flag, the bus roared into motion and set off on its first tour.

Cabinet Minister Sukhjinder Singh Randhawa delivered an impressive extempore the other day in Kalanaur. He became emotional while urging youngsters to read “life and times of great men like Banda Singh Bahadur.” His emotional range rivaled the most inspired of actors. He asked youngsters in the audience how many of them actually remembered the Sikh warrior. He was crest-fallen when not even a single hand went up. Then he delved deep into his speech and exhorted the youngsters to devote more time to remembering men who have changed their lives. “Those we love do not go away. They walk, besides us every day. Unseen, unheard but always near. Still loved, still missed and very dear,” he reminded the audience. After taking a break he went on with his speech, which was lapped by the gathering. “I know for certain, we never lose the people whom we love, even till death. They are a part of us in everything we do, every act we perform, every decision we make. Their love leaves an indelible imprint on our minds, in our memories. We find comfort in knowing that our lives have been enriched by these very men. Unfortunately, in an era of materialistic wealth, we tend to forget what these great men stood for,” he opined. Interestingly, towards the end of his extempore, Randhawa was courageous enough to admit that even the political class has forgotten its heroes, be it Banda Singh Bahadur or anybody else. “We politicians have become machines and all our efforts are directed at catching votes. Like you, we too are guilty for having forgotten our heroes. All that matters for us is how to get this vote or that one. This vote-bank politicking should come to an end. The buck should stop somewhere. As politicians, we must be responsible for ushering in a change. After all, change is the essence of growth,” he said. The minister could have gone on and on but when he cast an eye on the audience he saw many monotonous faces. He was virtually forced to put a full stop there and then.

No new bus stand for now?

Gurdaspur’s new bus stand is surely jinxed. Work was to start this month, but a ‘technical fault’ in the tendering process meant the bus stand will live at its old address instead of moving to its new one on Tibri road for some more weeks or maybe months. ‘Doubting Thomases’ are having a field day. They blame senior officials in the Improvement Trust (IT) for an inordinate delay. The IT had been entrusted with construction process. A cross section of residents strongly feels that some IT officials omitted some important terms and conditions in the tender document ostensibly to ‘help’ a local politician. Senior Chandigarh-based officers of the Local Bodies Department in Chandigarh ‘read the game’, refused to play ball and consequently put on hold the entire procedure. As a wag put it, “for the bus stand, the past is past, the present remains imperfect while the future remains tense.” He has indeed hit the nail on its head! (Contributed by Ravi Dhaliwal)