Meets workers, deliberates over strengthening party base at block level 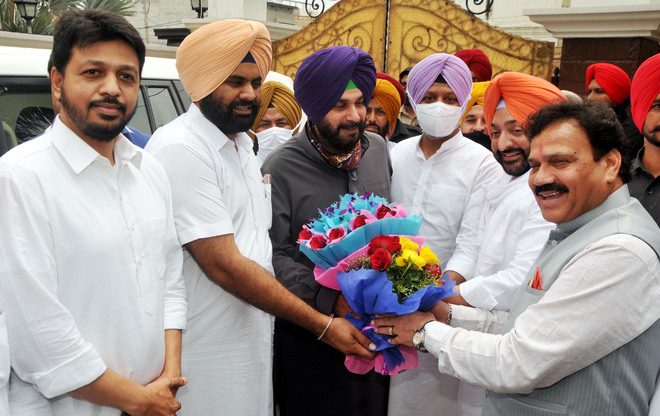 Accompanied by MLAs Inderbir Bolaria, Sukhpal Singh Bhullar and Raj Kumar Verka, Sidhu held a meeting with the workers and deliberated over strengthening the party base at the block level and also invited all to join the customary ceremony of taking over the charge officially scheduled at the Congress Bhawan in Chandigarh on Friday.

Punjab Chief Minister Capt Amarinder Singh will attend the ceremony, in which Sidhu will formally take over the reins of the state Congress. The development comes following the intervention of the party high command. Earlier, an invitation signed by Sidhu and four working presidents — Danny Bandala, Fatehgarh Sahib MLA Kuljit Singh Nagra, Pawan Goel and former PPCC general secretary and Urmur MLA Sangat Singh Gilzian — was collectively handed over to the CM in the morning by Nagra and Gilzian on behalf of Sidhu and other party MLAs.

The CM, too, has invited all state Congress MLAs, MPs and senior party functionaries for tea before the installation ceremony.

Sachar said Sidhu encouraged them to hold block-level meetings ahead of the ensuing Assembly elections in 2022. “With Sidhu’s elevation as PPCC chief, a new lease of life has been infused among workers, especially young leaders. We aim to get a convincing win in 2022 Assembly poll,” he said.

Bolaria said if Capt Amarinder Singh could be considered the body of the Congress, Sidhu would be the soul.

Raj Kumar Verka said every worker of the party from rural and urban areas would attend the installation ceremony of the new PPCC team. “We all have invited Capt Amarinder Singh to shower his blessings on us. The entire Congress is united on every issue and bound to obey the high command’s decision,” he said.