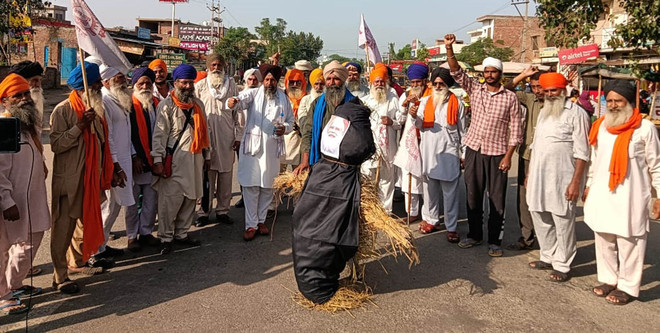 Farmers protest against the Centre for slow procurement of crop in Amritsar on Monday.

Farmers under the banner of Kisan Mazdoor Sangharsh Committee staged a protest on the Amritsar-Ganganagar Highway, near Chabba village, on Monday demanding action against those guilty of Lakhimpur Kheri incident and against rising prices of petrol and diesel.

The committee has also announced to initiate protests outside the district headquarters in the state. While burning the effigy of the Central government, farmer leaders also held the state government responsible for the shortage of DAP fertiliser and demanded compensation for the loss of produce due to heavy rains.

The Kisan Sangharsh Committee is not a part of the Sanyukt Kisan Morcha, however, it has been supporting most of the protests of the SKM. At the same time, it has also protested separately on different issues.

The leaders of the Aam Aadmi Party visited Bhagtanwala Grain market and alleged that unjustified cuts from Rs100 to Rs400 per quintal were being applied in MSP for paddy on the pretext of more moisture. Leaders including Jiwanjot Kaur, Harwant Singh Umranangal, Kuldeep Singh Dhaliwal and others alleged that the Centre and state governments were harassing farmers on one pretext or the other and farmers have to wait for long before their produce is procured.