Rise in cases of snatching, robbery in Amritsar 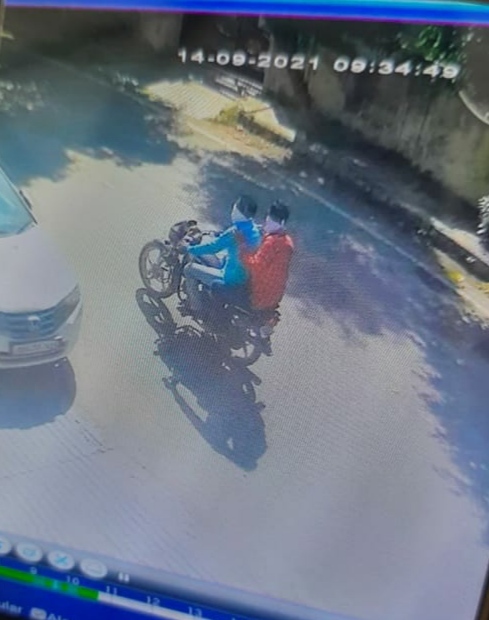 A CCTV grab of the suspect of Rani Ka Bagh loot in Amritsar. Tribune photo

Unchecked incidents of snatching and robbery have been a bane of the holy city. Most of such incidents are being reported from city and rural areas, instilling a sense of fear among traders and women.

The police have failed to nab perpetrators even as they make claims of arresting them from time to time. The police need to think out of the box to check alarming rise in such incidents.

In the fresh incident, two armed persons looted a grocery store in the posh Rani Ka Bagh area which also has the residence of Punjab Cabinet minister Om Parkash Soni. According to the victim, Sushil Kumar, the accused took away around Rs 25,000-30,000 cash and two mobile phones worth Rs 50,000.

He said he reached his shop at around 10.30 am when the two bike-borne youths with covered faces entered the shop. They pointed a pistol at him and commited the robbery. Assistant Commissioner of Police Sarabjit Singh Bajwa said investigation was in progress to identify the suspects and a case had been registered.

In a similar incident, a cosmetics shop owner was looted by armed persons in the posh Ranjit Avenue B-block area here on Monday. The victim, Gaurav, told the police that at around 11.30 am, he along with his worker Narinder Kaur was present in the shop when two persons riding a bike snatched his purse and Rs 18,000 cash from the counter and his mobile phone.

In another incident, two credit card firm employees were robbed of Rs 4.81 lakh in the Jandiala Guru area on Monday. Ashish Kumar Srivastva, who originally hails from Saharanpur in UP and works as branch manager of the firm at Patel Nagar in Jandiala Guru, told the police that he along with quality officer Pardeep Singh was going to deposit the amount in Punjab National Bank at around 10.40 am on a bike. He said when they reached near Mori Gate, two bike-borne persons intercepted them and snatched the bag after brandishing a sharp-edged weapon to them.

Amarjit Singh Asal, a communist leader, said miscreants seemed to have no fear of the law-enforcing agency. “Such incidents needed to be taken seriously and a sense of fear should be instilled among criminals so that people especially, traders and women, feel safe,” he said.

Police Commissioner Vikram Jeet Duggal said the police had been taking several measures to nail the snatchers. Robbers were arrested by the police on a regular basis.