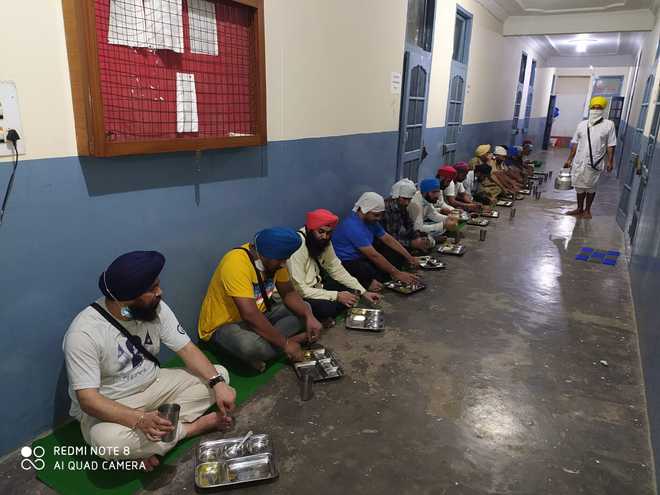 Followers of the Khadoor Sahib Kar Sewa sect serve food to people isolated at an isolation centre on Wednesday. Gurbaxpuri

With the death of a septuagenarian due to Covid-19 here, the toll in the district reached 44 on Wednesday. The district also reported nine new positive cases today with which the total number of positive cases has increased to 966.

The deceased has been identified as Om Parkash, a 73-year-old resident of Green Avenue, who was admitted to Amandeep hospital.

The remaining four patients are cases with contact history. Of these, one was reported from Basant Avenue, two from Jujhar Singh Avenue (Ajnala) and one from Kamla Avenue. The district has so far witnessed 759 recoveries, while 107 active cases are admitted to various hospitals and 56 have been kept in home isolation.

Meanwhile, the suspected patients, whose samples were sent for Covid-19 testing, continue to complain of delay in getting reports. Even as Cabinet minister Om Parkash Soni had instructed the health administration to ensure the availability of test reports, whether negative or positive, to the concerned patient within 24 hours, the reports in many cases were being delayed.

An insider at Employees State Insurance (ESI) Hospital, where at least three positive employees have been reported so far, said: “One of the radiographers at the hospital tested positive on Tuesday. The samples were sent for testing on June 23. It took seven days for him to know that he was positive.”

The employee’s sample was sent for testing as two employees at the hospital had tested positive earlier and the employee had developed fever. Even though he kept himself in self-isolation at home, chances of a gullible person acting as a spreader when he or she does not even know about his health status cannot be ruled out.