ABOHAR: Three labourers, who entered an empty crude oil tank to clean it in an industrial unit at the Focal Point near Alamgarh bypass, lost their lives here today. 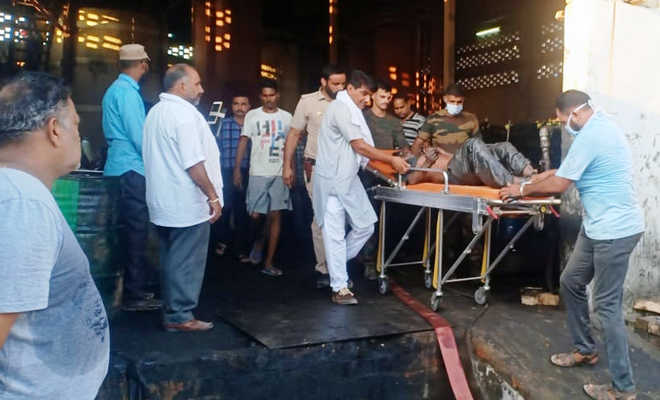 A rescue team shifts labourers who fell unconscious while cleaning an emptied oil tank at a factory in Abohar. Tribune photo

Three labourers, who entered an empty crude oil tank to clean it in an industrial unit at the Focal Point near Alamgarh bypass, lost their lives here today.

A team from the Military Station was finally called to help carry out the rescue operation. Three senior sewage experts prominently assisted in bringing out the trapped trio.

A preliminary investigation indicated that the labourers entered an empty oil tank to clean it at about 11.30 am in Gursewak Oil Factory. They fell unconscious due to suffocation and poisonous gas. More workers were called to rescue them, but Gurjit Singh of the second batch too fell unconscious. The unit owners reportedly delayed informing the administration perhaps to escape legal action and continued making efforts for a few hours to take them out, sources said.

Upon getting information, SDM Poonam Singh, SP Manjit Singh, DSP (Rural) Sandeep Singh and other cops reached the site. Officials from the Market Committee, the Food and Supplies Department besides the Fire Brigade and the Health Department were called to the Focal Point. Finally, help from the Military Station was sought. Army men were able to bring out four labourers from the tank in the evening. All were shifted to the Civil Hospital here where doctors declared Happy, Dhoni and Badri brought dead. Gurjit Singh is responding to treatment.

Police officials are reportedly questioning Amrik Singh and Gurdev Singh, owners of the refinery. Crude oil, better known as ‘kala tel’ or black oil, is collected in drums and transported through pickup vans from workshops and automobile service stations in the subdivision and is refined for re-use, a preliminary inquiry indicated. The authorities are examining the credentials of the unit besides considering requests to compensate the affected families.