JALANDHAR: Once a hub of Buddhist activity, the Jalandhar region has witnessed a recent Buddhist revival, thanks to the new-found political interest in Dr BR Ambedkar. 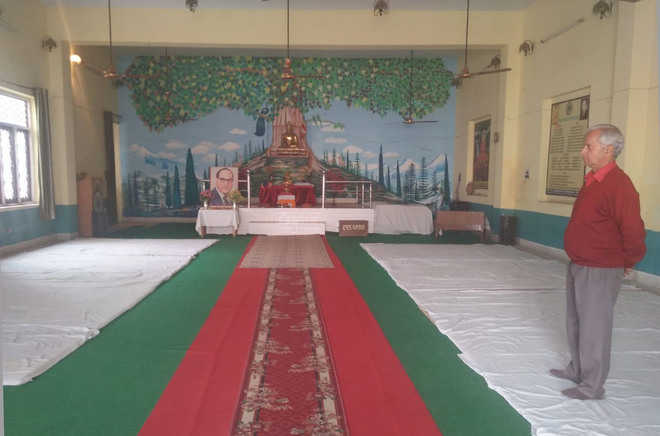 The Jalandhar-based Budh Vihar which was constructed in 1985. Tribune photo

Once a hub of Buddhist activity, the Jalandhar region has witnessed a recent Buddhist revival, thanks to the new-found political interest in Dr BR Ambedkar.

While Punjab had over 8,000 Buddhists as per the 2011 Census, majority of these are Ambedkarite Buddhists who are directly or indirectly inspired by Babasaheb’s conversion to Buddhism in 1956.

While there is a revival of Buddhist thought and lifestyle among Ambedkarite families, at least 15 Buddhist viharas have been constructed in the state, primarily by Ambedkarite families, since 1985. The oldest of these is the one at Siddharth Nagar in Jalandhar, constructed by a bunch of Ambedakrites inspired by a visit to the Deekhabhoomi at Nagpur where Ambedkar embraced Buddhism.

While Jalandhar alone has eight Buddhist viharas, the biggest one is in Ludhiana.

An Ambedkarite scholar and a retired Professor, GC Kaul, said: “On June 17, 1958, 5,000 persons embraced Buddhism in the state at an event held at Chak Hakim in Phagwara. Many of Ambedakr’s associates like Vimal Chander, Nanak Chand Rattu, Sohan Lal Shastri (Gurdaspur), Chanan Ram (Hoshiarpur), Labhu Ram among others all eventually converted to Buddhism.”

He added: “Another major conversion was seen in March 1991 at Hoshiarpur wherein 3,000 persons embraced Buddhism. In October 2015, at least 300 families embraced Buddhism. Besides mass conversions, a silent movement among Dalits is one wherein Ambedkar’s ideals are being embraced and since Buddhism is an essential part of his ideology, many are adopting it. In 1967, Lahori Ram Bali contested the MP elections and at that time also many came this way.”

Lahori Ram Bali, an associate of Ambedkar pivotal in the publishing of his many works after his demise, runs the ‘Bheem’ magazine dedicated to Ambdekar since 1956. He said: “Without Buddhist thought, Ambedkar’s message is incomplete. All his staunch followers are Buddhists. Over the years, many of these Buddhist families have donated money to erect viharas in Punjab. This started in 1985 and more are yet to come up. The latest one is at a village in Barnala. Our aim is to make concerted efforts to dispel the political thought that divorces Ambedkar’s ideology from Buddhism and social equality.”

Another staunch Buddhist and Ambedkarite pivotal in building the first Buddhist Vihara in Jalandahr, Ram Lal said: “We, a bunch of Ambedkar followers, had visited Dekshabhoomi in Nagpur. Then young and earning little, we contributed Rs1,000 each and a local landlord loaned his land to us for Rs16,000. With this money came up the first Buddhist Vihara. Jalandhar was once a Buddhist hub, but until now the traces of Buddhism have been depleted. With Ambedkarite thought, we are witnessing a revival. Currently there are at least 100-150 Buddhist families in Jalandhar who attend the Sunday service every week.”