Taking the road not travelled : The Tribune India

Taking the road not travelled

Travelling — it leaves you speechless, then turns you into a storyteller. 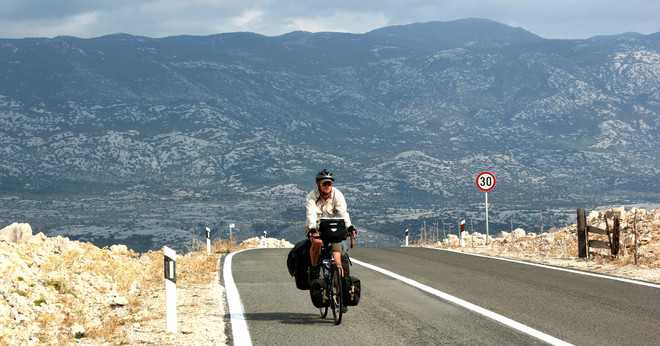 Around the World in 80 Ways:Tim Moss holds the World Record for the longest distance cycled on a rickshaw, walked across Wahiba desert, climbed mountains and much more

Far-off lands have always held a seductive charm inspiring people to travel to opposite ends of the earth. While some give in to it and discover different worlds; still others are satisfied remaining within their comfort zone and undertaking trips that fall within it. There is yet another category of people who defy all norms. For these adventurers at heart travelling to a new place is not enough. Their hunger for bigger plans drives them to draw audacious itineraries that will leave the average traveller reeling in awe.

Cruising the world on four wheels

Travelling has less to do with time, money, circumstances, and even small children, but a lot to do with will and passion. This was proved true by the Baid family — husband, wife and two pre-teens, who travelled from Bangalore to Paris by car, spanning 50+countries in an epic 111-day journey.

Anand Baid, owner of an online animation school, says, “The idea for this world trip started out as a joke. One thing led to another and before you know it, we had readied a road map from Bangalore to Paris.” He readily shares their experience on their Facebook page OverlandStories.

Punita, his wife and the kids echo his sentiments. Be it driving past the Himalayas in Tibet at 17,000 feet, mountain-like sand dunes in China, the world’s largest burning gas crater Darwaza in Turkmenistan, witnessing rich Uzbek culture and hospitality or taking a walk back into history in Greece, Rome and the Vatican City, they made the most of their road trip, despite an earthquake that had them sleep in their car for five nights at Nepal and China border.

Explorer on an expedition

For Tim Moss, an author and owner of a website The Next Challenge, the adventure started as a kid quite unexcitingly through walking trips. “At first, it was begrudgingly done with parents but I soon started going for treks with my friends in the UK’s national parks and along its national trails. At university, I saw a poster offering grants for expeditions and, on a whim, I applied. Nine months later, I was trudging knee deep in snow at 5,000-metres in Kyrgyzstan. Now I offer a grant of my own so that other people can go on adventures,” says Moss.

Moss has broken a Guinness World Record in a rickshaw, crossed Wahiba desert and Patagonia on foot, been elected a fellow of the Royal Geographical Society, worked for the Kaspersky Commonwealth Antarctic Expedition, been invited to meet the Queen at Buckingham Palace. He has accomplished more than what many of us dare to dream of. He believes that adventure requires neither time,  money, nor expertise.  According to Moss, expeditions shouldn’t be undertaken to prove your toughness, rather as a means to challenge yourself, inculcate self-belief and overcome prejudices.

Observe, interact and give back

Dubai-born Atul Warrier had an upbringing that was similar to any other Malayali back home. Starting out with Rs 1,500 per month at 21 and sans any discernible passion, drawn towards sales because he liked to be on the move and interact with people, he found himself in Bangalore working a 9-to-5 job in the media industry. However, a month-long trip on his trusted Royal Enfield Thunderbird across South India made him realise his true calling.

“The more I explored, the more I realised how great it felt to be able to talk to people without any labels and judgment. I stumbled upon a video that gave me a new direction and I was inspired to undertake a solo overland journey. That became the fulfilment of a dream — a journey of 550 days, 40 countries and four continents. After crossing 24 countries, it became less about accomplishing the numbers in the journey and more about self discovery and the inculcation of a sense of social responsibility. It was then I became associated with MAD (Make A Difference) which works with children in shelters across India,” says Warrier. He feels his solo travel gives him alone time that we all crave in the digitally connected world of today. It was travel that restored his faith in humanity.

99 buses, 82 trains, 70 taxis, 27 ferries, 21 tuk-tuks, 10 cars, seven motorcycles, three bicycles, three cruises, one sailboat and one cargo ship later, Niall Doherty has spent 44 months travelling around 37 countries. Impressive, but so have others; what’s different, you ask? Well, no flights! Says the adventurous Irishman, “I had €3,717 in my bank, when I began my trip around the world without flying. As I had a skill, I could use to make money online, doing freelance web design. I knew that even in the worst case scenario, I would be able to make money online anywhere to cover my expenses. His tip for travelling on a budget — be patient and flexible, looking for cheap fares instead of destinations. Spend more time in cheaper countries.”

Not only does he travel but also helps other people achieve their dream by teaching them ways to earn online at his website 3m1k. He encourages people to think for themselves, shake things up, face their fears, live their dreams and stop living life on autopilot on his website that, as the name suggests, believes in Disrupting the Rabblement.

So dreamers! if you have a dream, don’t do it on the couch. Get up and go for it. Happy adventures!