LALRU: Four members of a Kurukshetra-based family had a miraculous escape when their car was hit by a speeding canter near Kurli village on Friday morning. 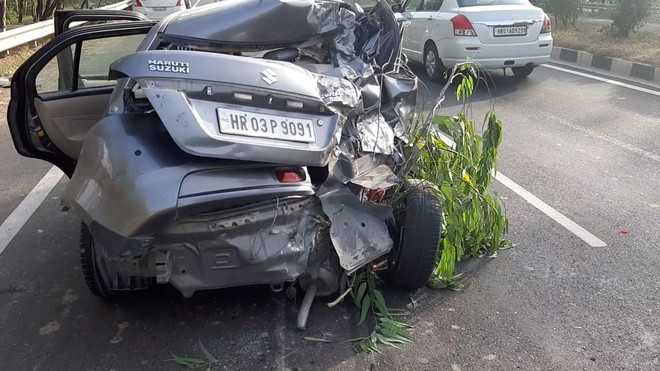 The mangled remains of the car that met with an accident near Lalru. Tribune photo

Four members of a Kurukshetra-based family had a miraculous escape when their car was hit by a speeding canter near Kurli village on Friday morning. The canter bearing Haryana registration number dragged the car for around 100 metres before coming to halt.

However, the occupants of the car – Surinder Kumar, his wife Kavita, and their children Riya and Umesh –escaped with minor injuries.

According to sources, the incident happened on Friday morning when Surinder along with his family was going towards Baddi from Kurukshetra. When they reached near Kurli village, Surinder parked his car along the roadside to attend nature’s call.

In the meantime, a canter coming from the Ambala side hit the car from the rear end and dragged it for around 100 metres. Other family members, who were inside the car during collision, were stuck inside mangled remains of the vehicle. They were taken out by policemen, who carried out the rescue operation.

The police have registered a case against the canter driver identified as Vishnu Sharma, a resident UP, under relevant sections of the IPC. — OC