CHANDIGARH: With a majority of the state’s marginal farmers finding it tough to carry on with agriculture owing to different reasons, the Punjab government has sought the World Bank’s help to progress in the field of crop diversification. 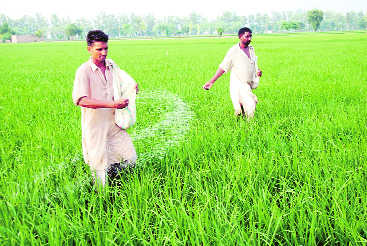 With a majority of the state’s marginal farmers finding it tough to carry on with agriculture owing to different reasons, the Punjab government has sought the World Bank’s help to progress in the field of crop diversification.

About 65 per cent of the Punjabis are directly dependent on agriculture. The land and the water resources in the state, thus, have been overexploited.

A delegation of senior officials, led by Suresh Kumar, Financial Commissioner (Development), raised their concerns with the World Bank’s Senior Director, Juergen Voegele, at a meeting in New Delhi last evening. What has been bothering the government the most is soil degradation, falling water table, threat to bio-diversity and rising input costs.

Punjab has seen reckless use of resources over the past several years to grow more for ensuring food security to the nation. But the Centre, of late, has been insisting that the state should wean away from paddy as most of the mainly rice-consuming states had become self-reliant.

Experts say Punjab needed to explore fresh avenues in the horticulture, fruit industry, poultry, dairy and related sectors that had been contributing more than the traditional crops such as wheat, rice and cotton towards the GDP in developed nations. They say Punjab too could achieve success in the new cropping pattern as the state had a dependable irrigation system.

Assuring its support to deal with various issues, the World Bank official has told the government to prepare a detailed report on each aspect, including degradation of soil and falling water table. The World Bank would then hold an internal discussion to engage experts for finding the way forward without compromising on the livelihood of the families dependent on the farm sector.

Whereas the farm sector earlier used to be a major employer, it no more attracts the youth. Because of this factor, unemployment has significantly risen in the countryside. As a result, jobless youth have been falling prey to drugs and other ills.

The delegation told the World Bank that the need of the hour was to attract more people towards agriculture, for which expert advice was inevitable. One of the solutions being offered by experts was that Punjab should move from traditional farming to high-value crops, including vegetables and fruits, which had a lot of potential. But for this, the state lacked the requisite infrastructure, including cold-store chains.

RS Paroda, former Director-General of the Indian Council of Agricultural Research (ICAR), said the youth nowadays had no interest in traditional farming.

“Without making agriculture exciting for the youth, we cannot involve them in the farm sector. Once they are involved, we can surely achieve our target,” he said.