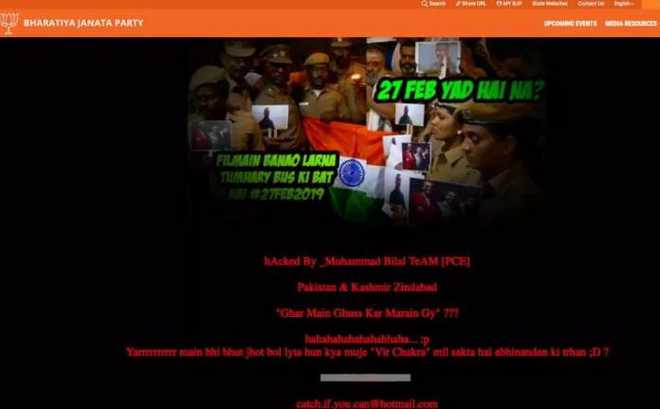 The website of BJP's Delhi unit was hacked on Saturday by suspected Pakistani hackers, who defaced the page and posted abusive language against Prime Minister Narendra Modi.

A hacker group called _Muhammad Bilal TeAM [PCE] has claimed that it has hacked the website with a message like "Ghar main ghuss kar marain gy (will beat after entering the house) and "I can lie a lot, can I also get a 'Vir Chakra' like Abhinandan" with an email ID - catch.if.you.can@hotmail.com.

The hacker posted another message, which read: "filmain banao larna tumhary bus ki bat nahi #27Feb2019 (make films, you cannot fight)"  The reference to February 27 was ostensibly to the downing of a MiG fighter plane by Pakistani forces while the Indian Air Force jets were chasing away the Pakistani fighter planes when they attempt to breach Indian air space.

Abhinandan, flying MiG Bison, shot down a Pakistani F-16 in the aerial dogfight but in the process, he crossed into Pakistan territory where his fighter plane was shot down and he was taken into custody, to be released two days later. Abhinandan was conferred the Vir Chakra gallantry award in August 2019.

In May this year, the website of the BJP's Delhi unit was hacked with photos of beef dishes posted on it. — IANS