JAMMU: The Pakistan army continued to violate the ceasefire agreement along the Line of Control (LoC) in the Sunderbani and Akhnoor sectors. 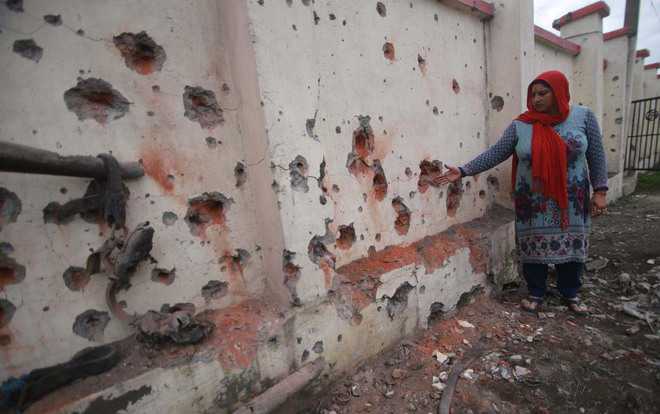 A local shows a damaged wall after Pak shelling in the Pallanwala sector on Tuesday. Tribune photo

The Pakistan army continued to violate the ceasefire agreement along the Line of Control (LoC) in the Sunderbani and Akhnoor sectors.

Mortar shelling and small arms firing continued throughout the night in Akhnoor sector.

Hours after Rifleman Karamjit Singh was killed and four others injured in shelling along the LoC, the Pakistan army again violated the truce in the Sunderbani and Akhnoor sectors.

According to Defence PRO, the Pakistan army initiated unprovoked shelling with mortars and small arms firing along the LoC in the Sunderbani and Akhnoor sectors, after which the Army retaliated befittingly.

Firing in the Sunderbani area of Rajouri district stopped after an hour, however, it continued throughout the night on Monday in the Chhamb and Jourian areas of Akhnoor sector of Jammu district.

No loss of life was reported.