NEW DELHI:Seven new miniature frog species in the world, which can comfortably sit on a coin or a thumbnail, have been discovered by Indian scientists in the Western Ghats. 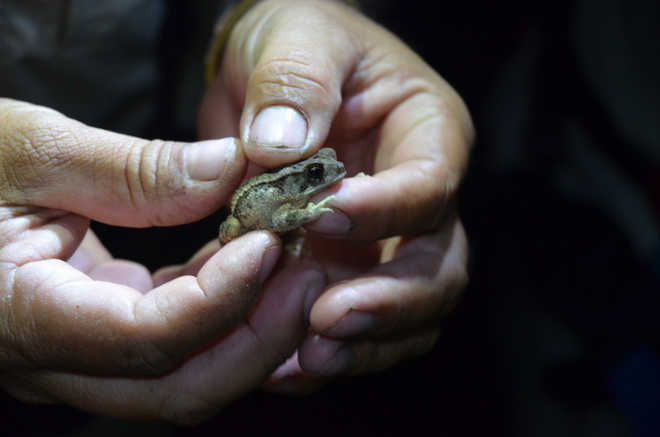 Seven new miniature frog species in the world, which can comfortably sit on a coin or a thumbnail, have been discovered by Indian scientists in the Western Ghats.

The study conducted by two Delhi University-based researchers with five years of extensive explorations in the Western Ghats said that these frogs were overlooked earlier because of their insect-like calls and secretive habitats.

"It is a very interesting finding because they are from small geographical region. Apart from big animals like Tiger and elephants, there is a need to conserve this tiny amphibian also as they have been ignored. It is a very cute and small animal," Prof SD Biju, who led the new study told PTI.

"Over 32 per cent, that is one-third of the Western Ghats frogs are already threatened with extinction. Out of the seven new species, five are facing considerable anthropogenic threats and require immediate conservation prioritisation," he said, adding that these frogs are active during both night and day time unlike other breeds who are active only during night.

"Till now only very few miniature frogs were known in this group. It is a very good find. They are very ancient group of frogs which evolved much earlier. These species of frogs is exclusive to Western Ghats which has vast diversity," Sonali Garg, who undertook this study as part of her PhD research at University of Delhi, said.

"In fact, the miniature species are locally abundant and fairly common but they have probably been overlooked because of their extremely small size, secretive habitats and insect-like calls, Garg said.

In India, we really need to conserve small forms of animals because they have not been highlighted, so there is a need to make their presence felt as well, she added.

Unlike other frogs in the Nyctibatrachus genus (Night frogs) that are predominantly stream dwelling, the new miniature frogs were found under damp forest leaf litter or marsh vegetation, the report said.

Previously, the Night Frog genus comprised of 28 recognised species of which only three were miniature-sized (less than 18 mm). Now the total number of known species has increased to 35, of which 20 per cent are diminutive in size, the report in the journal said.

This frog genus is endemic to the Western Ghats and represents an ancient group of frogs that diversified on the Indian landmass approximately 70–80 million years ago. — PTI