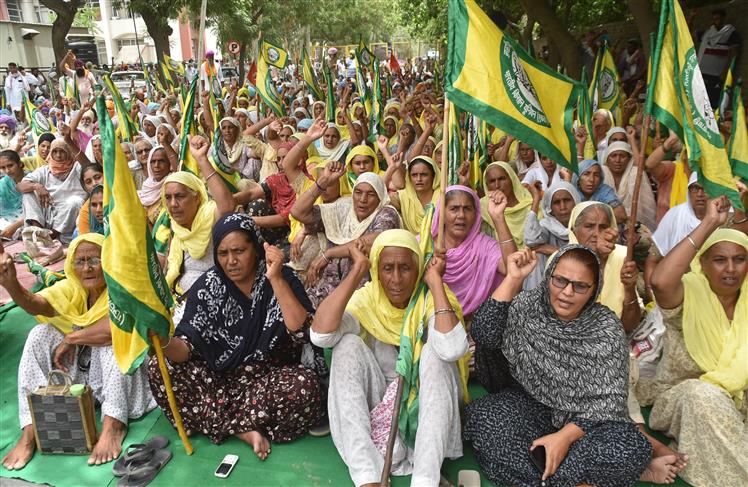 Farmers under the banner of the Bhartiya Kisan Union (Ekta Ugrahan) today protested outside the DC office over skyrocketing rates of diesel and petrol, uninterrupted power supply to fields and households and supply of canal water to tail-end villages.

A delegation of farmers handed over a letter to the Deputy Commissioner in which various demands were addressed to the Prime Minister and Chief Minister. Addressing the gathering, state senior vice-president Jhanda Singh Jethuke and Bathinda district general secretary Harjinder Singh Baggi said the pro-imperialist policies of the BJP-Modi government were the reason behind the hike in diesel, petrol and cooking gas rates. Fuel had been kept out of the ambit of the GST and government taxes had been levied on it, the protesters claimed.

In Fatehgarh Sahib, BKU members held a protest in front of the DC office and disrupted the traffic in protest against undeclared power cuts and increase in fuel prices. They raised slogans against the Union and state governments.

BKU leader Jaswant Singh said the government had promised to give 8-hour uninterrupted power supply but failed to do so. He said it had become difficult for farmers to transplant paddy and they were suffering losses. — TNS