Say agri laws not in their interest 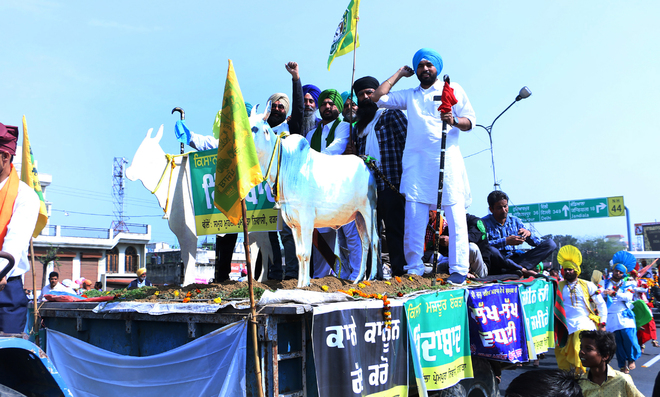 A tableau, depicting the farmers’ agitation, part of the shobha yatra being taken out to mark Guru Ravi Dass Jayanti in Phagwara on Friday. Tribune photo: Malkiat Singh

Demanding the repeal of central farm laws and resolution of other issues of labourers, the Punjab Khet Majdoor Union will hold a state-level rally in Bathinda on March 15.

Revealing this, union general secretary Lachman Singh Sewewala said thousands of labourer men and women would participate in the rally. He said in the rally the crucial role of labourers in the fight against the farm laws would be highlighted, and they would be made aware of negative impact of the laws on their lives.

Besides issues like oppression of Dalits, mounting debt on labourers, electricity bills, amendments to the labour laws and land distribution would raised, he added.

Sewewala feared the farm laws would become a tool to capture the panchyati, saamlat and government land by corporate houses, and end the Land Sealing Act. He stressed this would lead to end of the issue of distribution of the surplus land to labourers and landless.

Union leader Harmesh Malri said due to the pro-corporate policies of the government, labourers who were already committing suicides, would further be thrown deep into the crisis.

PKMU leader Harbhagwan Singh Moonak alleged the Capt Amarinder Singh government had also failed to fulfil its promise of debt waiver and employment to every house on which it came to power. — TNS