Rs 3 crore to be spent on repair, recarpeting, lighting of 200 km of tracks in Chandigarh 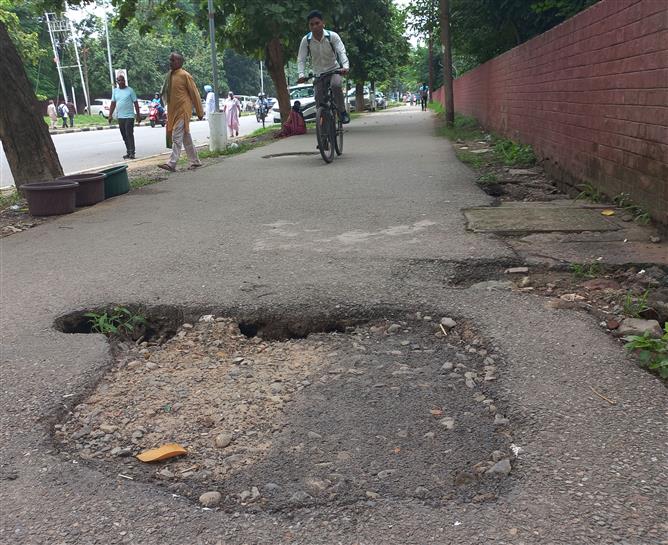 Bearing the brunt of monsoon rain, several stretches of cycle tracks are crying for attention. Potholes and uneven surface have forced cyclists to risk their lives and ride on the main road rather than the dedicated cycle tracks. At some places, the entire stretch has been damaged.

Rs 3 crore to be spent on repair, recarpeting, lighting

200 km of tracks in Chandigarh

A cycle enthusiast says there is a striking contrast between the upkeep of tracks in northern and southern sectors. In northern sectors, number of cyclists are fewer, but the tracks are in good condition, whereas in the southern ones, tracks are in poor shape while the number of users is way higher, he says.

Flooded with complaints of poor condition and maintenance, the UT Administration has now decided to spend nearly Rs 3 crore on upgrade of most of the tracks in the city.

An official of the Engineering Department says the work will include repair and recarpeting, besides installation of streetlights and roads signage. Major work will be carried out on cycle tracks at Shanti Path, Paschim Marg, Vidya Path, Udyan Path, Jan Marg, Sarovar Path, Sukhna Path and Chandi Path. It will take nearly two months to complete the work, says the official. The department will spend Rs 2.73 crore on upgrading tracks.

Streetlights will be installed at Dakshin Marg, Udhyog Path, Shanti Path, Madhya Marg and Sector 27 at a cost of nearly Rs 24 lakh.

For improving the safety and convenience of cyclists, signboards on cycle tracks will be installed on Jan Marg, Dakshin Marg and Uttar Marg at a cost of Rs 6.12 lakh.

The city has over 200 km of cycle tracks, which were constructed at a cost of more than Rs 22 crore.

Where money will go

Rs 6.12L on putting up signages