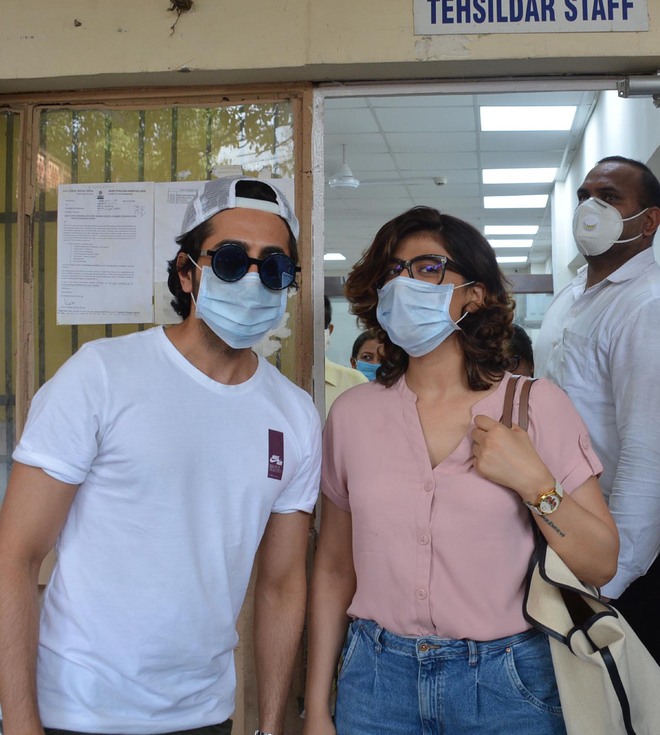 Ayushmann Khurrana and his wife Tahira Kashyap at the tehsil office in Panchkula on Monday. Photo: RAVI KUMAR

Local lad and Bollywood star Ayushmann Khurrana has come back home. The star, who was recently seen in Gulabo Sitabo alongside Amitabh Bachchan, has bought a house in his home town — Sector 6 in Panchkula — for Rs9 crore.

Ayushmann was in the city today to get the registration of the house done in his and his wife Tahira’s name. He and Tahira visited the tehsil office at the Mini-Secretariat for this purpose.

Ayushmann is no stranger to Panchkula as his father, P Khurrana, who is a known astrologer, lives in Sector 2 here. The actor, who had made his debut with Vicky Donor, had earlier paid the earnest money as well as the TDS. Today, at the time of getting the house registered in his name, he paid the remaining money to the sellers — Subhash and Veena Bindra. The total area of the house is 869.50 sq metre. Sector 6 is a posh area as several businessmen, IAS officers and IPS officers have built their houses here.

The real estate sector in Panchkula had been facing a dismal scenario for the past few years. “However, after the spread of the pandemic, the rates have seen a little upswing as many people from Delhi and other affected places had purchased property here in the past three months,” said Arvind Kumar of Ishwar Property Consultants.

As the news about Ayushmann’s presence in the tehsil office spread, hundreds of his fans gathered at the Mini-Secretariat. However, two bouncers accompanying the actor managed the rush.