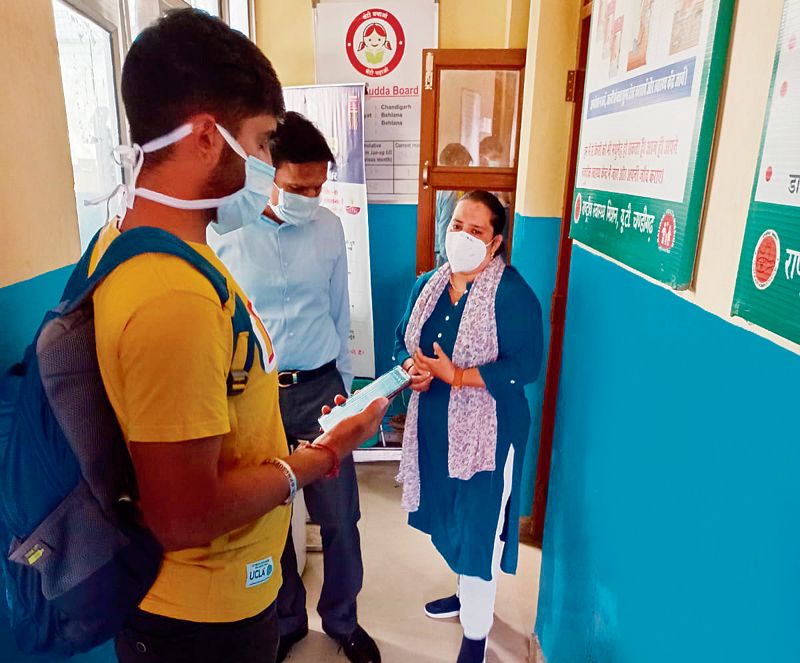 Chandigarh Health Secretary Yashpal Garg during a surprise inspection at the Health and Wellness Centre in Behlana, Chandigarh, on Thursday.

In yet another surprise inspection, UT Health Secretary Yashpal Garg found the Health and Wellness Centre (HWC) at Behlana locked this morning.

To keep the staff on their toes, the Health Secretary conducted a surprise inspection of the HWC at 9.20 am and found the ground floor locked and the first floor unlocked where vaccines were stored. “No one was present there except a patient, who was waiting for the HWC to open,” he said, adding that almost at the same time, ANM Vandana also reached there. As the keys of the centre were not available, the Secretary, the ANM and the patient kept waiting there for the HWC to open.

No one was present there except a patient, who was waiting for the centre to open. We need to ensure punctuality on the part of officials so that patients don’t have to wait. —Yashpal Garg, UT Health Secretary

According to a note sent to the UT Director, Health Services, at 9.30 am, sanitary beldar Ashok Kumar came there and located the keys and opened the HWC. He, however, stated that he was coming through Raipur Khurd after meeting some officer in connection with medicines. At 9.35 am, sanitary beldar Rahul reached there with an excuse of coming through the ADM office after delivering some “dak” there.

In the meantime, the ANM called up Dr Hansraj Rahi, Medical Officer (MO), HWC, on the phone and requested him to reach early. Garg said he also called up Medical Superintendent Dr VK Nagpal to enquire about the MO. Meanwhile, Jaswir Kaur, ANM, who was initially stated to be on leave, came there at 9.40 am with an excuse of having some patient in the family. However, Dr Hansraj Rahi reached the centre at 9.52 am.

Later, sanitary beldar Karan reached there at 10.04 am. He firstly took the plea of a traffic jam, but when the Secretary stated that he was more than one hour late and there such a long traffic jam was unlikely, he came with a new plea of having health issues.

During the first inspection, carried out on September 13 night, he had specifically asked not to take any action against any staff member. However, now, an explanation has been sought from Dr Hansraj Rahi, Jaswir Kaur, and Karan with comments for action against them, he said.

Garg said he had planned to inspect two more HWCs, but because of the time taken at the Behlana centre, it was decided to leave it for some other day and he left the Centre at 10.05 am after interacting with the patients waiting there.