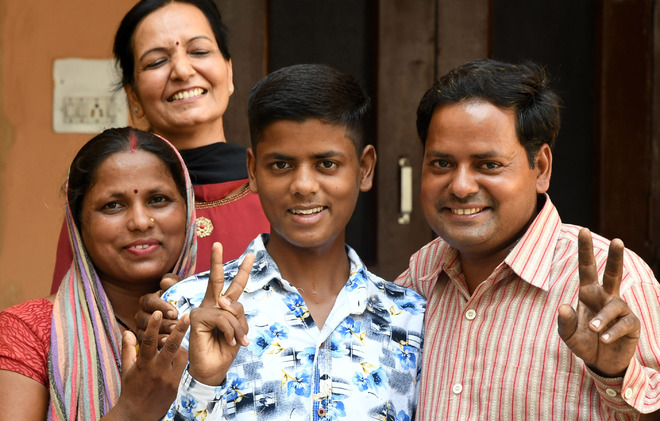 Shubham Maurya with his parents and a teacher in Panchkula.

The son of a gardener and a resident of Old Panchkula, he scored 98.60 per cent to emerge the district topper.

On his preparations, the achiever said, “I used to study for four-five hours after returning from the school. However, the time spent on studying doesn’t matter, but one should be regular. Online learning platforms and teachers helped me a lot in clearing doubts. I don’t use any social media application.”

His parents Raj Bahadur and Lalti Devi said he did not want to limit himself and aimed high. Shubham, who wants to pursue non-medical in Class XI, said he aspired to be an architect as buildings and their design always fascinated him. Sharing his success mantra, he said there were times when he found it hard to focus on studies, but not losing confidence held the key.

Gardening and painting acted as stress busters for the district topper.

In Panchkula, a total of 4,762 students had appeared for the exams. The district recorded a pass percentage of 65.16 with 3,103 students coming out with flying colours. In the terms of pass percentage, Panchkula ranked 11th. — TNS