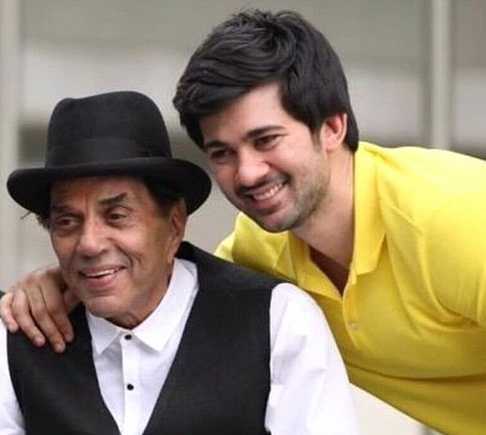 A file photo of Dharmendra with grandson Karan Deol.

Dharmendra is one of the most loved actors in Bollywood and we all want him to be at his best.

He has a huge fan base, who keep posting on social media about Dharmendra’s health and well-being.

Sometime back, rumours of "secret engagement" of Sunny Deol’s son Karan Deol with Drisha Roy were doing the rounds.

Earlier this month, 86-year-old Dharmendra was admitted to a private hospital in Mumbai. His health is said to be improving and he is doing fine now.

As of now, no official statement has been released from the Deol family.

However, when the media asked Sunny Deol about the engagement, he categorically denied it.

He said, “It's all bull***. My father is perfectly fine. There is no engagement of Karan Deol and Drisha Roy.

Drisha Roy is a fashion designer. She also runs a YouTube channel in which she shares a lot of interesting information related to her fashion, blogs and makeup. Disha is the granddaughter of veteran filmmaker Bimal Roy, who directed films like ‘Parineeta’, ‘Devdas’, ‘Madhumati’ and ‘Do Bigha Zamin’.