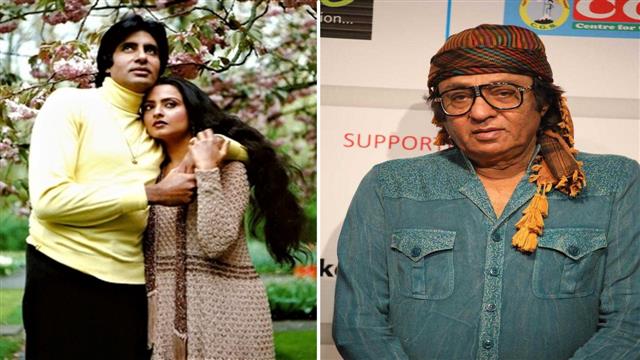 The relationship between actors Rekha and Amitabh Bachchan has remained a mystery as both actors never accepted it in public, but it was one of the most talked-about in Bollywood.

Back in the '90s, veteran actor Ranjeet had made a comment on how Rekha would reserve her evenings to spend time with Big B.

Rekha would still open up about her feelings for Amitabh; on the other hand, Big B maintained a dignified silence since he was already married.

It was around this time that veteran actor Ranjeet, known for negative roles and carrying the bad boy image in Bollywood, had passed a casual remark about Rekha and Amitabh's alleged affair.

Turns out Rekha was the initial choice for Ranjeet's 1990 directorial ‘Kaarnama’. However, as per Ranjeet's claim, Rekha requested him to shift all the evening shoots to morning as she wanted to spend time with Big B. Eventually, Rekha was replaced with  Farha Naaz in the film.

In a throwback interview with a leading daily, Ranjeet had made this revelation about Rekha's request to him during the shoot of ‘Kaarnama’. "One day Rekha called and requested if she could move to the morning shift as she wanted to spend evenings with Amitabh Bachchan," Ranjeet was quoted as saying.

Owing to Rekha's unavailability, Dharmendra, who was the initial choice for ‘Kaarnama’ recommended Anita Raaj as the lead heroine. However, Ranjeet lost out on both Dharmendra and Rekha and finally made the film with Vinod Khanna and Farha.

In an interview to Filmfare in 1984, Rekha had spoken about Amitabh’s denial of their relationship. She had said: “Why should he have not done it? He did it to protect his image, his family, his children. Why should the public know of my love for him or his love for me? I love him and he loves me- that’s it! If he’d reacted that way towards me in private, I would have been very disappointed. Bachchan is still old-fashioned. He doesn’t want to hurt anybody, so why hurt his wife?”