14 Jat and conquest of Comilla

A Second Lieutenant straight out of IMA recalls his baptism by fire, and the valour he saw first-hand 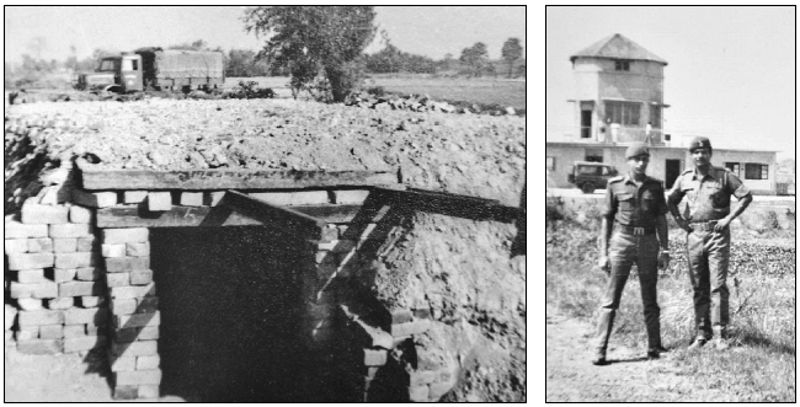 (Above) An enemy bunker in Comilla; and the writer with Maj KN Rai (right) at the Comilla airfield. Photos courtesy The writer

HARDLY a fortnight after passing out from the Indian Military Academy, it was late evening of December 1, 1971, that I, after an arduous journey of five days, finally made it to 14 Jat, deployed near Agartala on the East Pakistan border. The next day, the battalion got orders to move to firm base for the capture of Lalgarh-Mian Bazaar by 1300 hours on December 4. Barely 20, I, a Second Lieutenant, was destined to open the innings in the war zone, as Platoon Commander and 2i/c of ‘A’ Company.

14 Jat, which was part of the 301 Infantry Brigade, sounded the war bugle on a high note on the night of December 3-4. When moving from firm base towards the objective, our protective patrol clashed with the enemy. In the ensuing encounter, eight enemy bodies were accounted for. Naib Subedar Ram Singh, the patrol leader, was awarded the Vir Chakra for the daring action.

December 4 was set to be a crucial day. An attack by ‘D’ Company, along with Armoured Squadron (7 Cavalry), at first light on Lalgarh got stalled after the initial success. The fire support by tanks was not effective either. While preparations for a full-fledged battalion attack were underway, the Armoured Squadron and ‘A’ Company were ordered to isolate Mian Bazaar to build pressure on the enemy.

The bold manoeuvre by the Armoured Squadron proved decisive as the enemy, fearing being cut off, began to withdraw, although it came at a price. We lost three tanks. A jawan got killed and 10 were wounded, including two officers. This action significantly facilitated our battalion capturing Lalgarh by the afternoon, suffering nine casualties. After reorganisation, we headed for the next objective, Buschi, and secured it by December 5.

At 0830 hours on December 7, Maj Gen RD Hira, MVC, GOC of 23 Mountain Division, tasked Lt Col LN Sabharwal, CO of 14 Jat, to capture Comilla as soon as possible. Comilla, a politically important town, was a vital communication centre. Its early capture was crucial for further progress of the Division operations. The attack was planned in three phases:

Phase 3: After the capture, hold Comilla, including the airfield.

The battalion commenced the advance to Comilla at 1000 hours on December 7. En route, the enemy position at Gazaria was cleared by ‘B’ and ‘D’ companies and Lakshmipur by ‘C’ Company, where six enemy soldiers were taken prisoner.

After last light, the ‘A’ Company under Maj KN Rai resumed advance and I was leading the navigation party. We quickly secured the airfield. Hereon, in the absence of an updated map, I had to rely on a captured Razakar (militia soldier) as the guide. Ironically, we completely missed the objective, Tomtom (Thomson) Bridge, envisaging it to be a prominent landmark though it was actually an incognito culvert. Consequently, the Company Headquarters and leading platoons walked right into the enemy’s main defences, with the CO’s party following just on the heels.

It was almost midnight and in close proximity were a few Pakistani soldiers loading weapons in a truck. To maintain surprise, there was complete radio silence. Hence, Maj Rai asked me to check from the CO if we were to continue the advance. I must have gone hardly 40-50 metres down the road when two enemy vehicles, a jeep and a 1-tonne, suddenly appeared, heading towards the town. As I swiftly moved aside, the jeep drawing fire from our troops deployed around came to a screeching halt right where I was.

Instantly, I fired a long burst from my carbine at the jeep, at almost handshake distance. As I was about to fire another burst, someone abruptly jumped out from the jeep in front of me. Spontaneously, I fired at him but after two rounds, the carbine got jammed and the individual managed to flee, pleading; “Have mercy in Allah’s name!”

As I was in the process of removing stoppage from the carbine, a volley of bullets from the jeep went whistling over my head. Someone pulled me down. It was Sepoy Chote Lal from ‘A’ Company Headquarters. Soon, the jeep was aflame and exploded with a bang. The 1-tonne was engaged by Capt SJ Bhatia, Battalion Adjutant, and was destroyed too. In this lightning action, 12 enemy soldiers were killed.

Making my way back to ‘A’ Company amidst the melee with Chote Lal in tow, I bumped into men of ‘B’ Company, who momentarily took me to be a Pakistani officer. Timely intervention by Maj Bachan Singh, ‘B’ Company Commander, saved the situation. As I passed by our 81 Mortar detachment, which was in the process of deployment, an enemy artillery shell landed in its vicinity, killing three of our men.

Soon I linked back with the ‘A’ Company Headquarters. A bloody skirmish was on. During the ensuing fire-fight, Company Havildar Major Kishen Singh single-handedly destroyed two enemy machine guns in a close-quarter engagement, taking a heavy toll of the enemy. In the process, he was fatally wounded. Major Rai, in another daring action, silenced a BMG. Subedar Raghubir Singh, ‘A’ Company senior JCO, was also killed in this action. It was deeply tormenting. I had developed a close bond with both Raghubir and Kishen in just a few days.

The fighting continued through the night, amidst complete confusion. It being a built-up area, our operations had to progress from house to house in small teams, hand grenades being used extensively. The artillery support was not very effective against well-fortified defences. By early morning, Comilla finally fell. The intensity of fighting was evident from the enemy casualties: 43 killed and 32 were taken prisoner (including Maj Shah Nawaz Khan, 2i/c of 30 Punjab, who had escaped by jumping out of the jeep a few hours earlier; he was found in a wounded condition in hospital). More than 50 weapons were captured. Our casualty list included 17 killed and wounded.

It was a Herculean feat, 40-km distance covered on foot in barely eight hours with full battle loads, and the enemy being taken by complete surprise. Soon, people in large numbers came out on the streets euphorically shouting “Joi Bangla”. They offered us eatables and cigarette packets as a mark of gratitude.

The Army Commander, Lt Gen JS Aurora, and Corps Commander Lt Gen Sagat Singh landed at the Comilla airfield the same day to a rousing welcome by the locals. They personally complimented the CO for our Battalion’s commendable performance in capturing Comilla.

On December 15-16, our Battalion was tasked to capture Nabiganj, Bandar-Madanganj-Narayanganj, the well-prepared defensive positions on the outskirts of Dhaka. These were hard-fought fiery actions, with both sides taking heavy casualties: the enemy had 40 killed while we suffered 28 (killed and wounded).

The Battalion Mortar Platoon under Capt SS Tanwar proved very effective, compensating for the paucity of artillery support; its performance was lauded even by the adversary. 14 Jat, raised on October 1, 1963, acquitted itself with distinction in the finest traditions of the Indian Army. In war, there are many defining battles which remain unknown, Comilla being one such classic action.