It started with Hollywood films, and Bollywood followed suit. Courtesy lockdown, big banner Hindi films are queuing up for release on OTT platforms. The entertainment industry has been hit hard and there seems no succour anytime soon. Skipping theatre release, it appears, is the only way out for now. But does this apply to Punjabi cinema as well? The stakeholders think otherwise and cite various reasons.

Just two days before lockdown, one of the most-awaited Punajbi films of the year, Chal Mera Putt-2, was released. Starring Amrinder Gill in the lead, this Rhythm Boyz production was out amidst coronavirus grabbing headlines but even then its two-day response worldwide was noteworthy. The makers say they have suffered huge losses in the last two months. “Chal Mera Putt was our big-budget film. We had Jodi’s release planned for June 26. For the last five years, every last Friday of July has been reserved for our top production. This year we are set to miss that mark too. But work we must and have just announced a new film, Uchha Burj Lahore Da,” says Karaj Gill, producer-distributor Rhythm Boyz. He says film shootings need to resume soon to keep the industry afloat. Each film employs roughly 200 people; their livelihood has been hit, he says.

However, despite everything going against the industry, digital may not be the best bet for Punjabi cinema. “The kind of money OTT platforms offer to regional cinema is not enough to recover the costs. Low-budget films might be able to break even through this, but not us.” Karaj is now waiting to re-release Chal Mera Putt followed by Jodi. He is hopeful that Canada will open cinemas in June for old films and July for new ones. He has his fingers crossed.

Munish Shani, who runs production-distribution company Omjee Star Studios, too is eagerly waiting for the cinema halls to open. “Multiplexes are in talks with the government to open by June end or first week of July. Once that happens and all the safety measures — such as change in seating plans, sanitising halls after every show, increasing the time gap between shows — are chalked out, things will pick up,” he says, adding that 33 per cent occupancy means something is better than nothing. However, he too feels digital release is not an option before Punjabi cinema. “Digital medium only offers you 10-15 per cent of your total budget.”

For a filmmaker, reaching a wider audience is priority, and that’s not what OTT can offer in India, opines Gunbir Sidhu, producer-distributor, White Hills Studio. “The Indian market, especially states like Bihar, UP, Odisha, still do not have that kind of internet access. A big-budget film can’t recoup costs from the digital medium.”

Gunbir says movie halls are still going to play a pivotal role in India, especially for another five to seven years. However, he does not deny the growing presence of OTT. “I believe the combination of both is going to be successful in India,” he says.

Highlighting the economics of every film, Pawan Gill, producer of Brat Films, says the debate of OTT over theatrical release isn’t just a phenomenon limited to lockdown. It has been there since digital platforms entered the market. “In the current scenario, every producer has to see what’s the best for his film and the revenue model.”

Exploring various avenues, protecting their projects, producers will first look at numbers but for an artiste, art takes precedence. Gippy Grewal is both actor and producer and he is clearly ready to wait till 2021. “Three of our films — Posti, Men in Black and Maa — were complete and ready for release, but I have decided to wait out for the rest of the year too. If cinemas open and things normalise by September, the audience will still be wary and it will take three-four months for things to pick up. I am personally not convinced about releasing my films on OTT because they were made for the big screen. Had they been designed keeping in mind digital release, I wouldn’t have blinked an eye.” However, he says the industry will have to start making content for OTT platforms in future. “It’s a lesson taught by the pandemic,” he shrugs.

Jagdeep Sidhu, known for hits like Nikka Zaildaar, feels the global crisis has laid open a critical point for the Punjabi film industry. “We do not have much content to release digitally. Hardly two-three films may be ready for immediate release. When the lockdown was imposed, most films had post-production, editing pending. We weren’t thinking digital; our mind was working towards cinemas. Unfortunately, that means a year-long slump. Next big release will come in February 2021.” 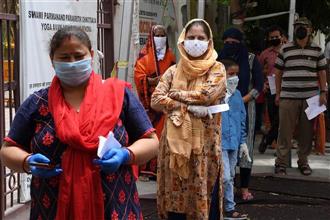